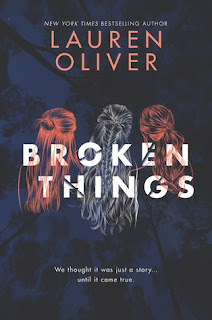 From Goodreads:
It's been five years since Summer Marks was brutally murdered in the woods.

Everyone thinks Mia and Brynn killed their best friend. That driven by their obsession with a novel called The Way into Lovelorn the three girls had imagined themselves into the magical world where their fantasies became twisted, even deadly.

The only thing is: they didn't do it.

On the anniversary of Summer's death, a seemingly insignificant discovery resurrects the mystery and pulls Mia and Brynn back together once again. But as the lines begin to blur between past and present and fiction and reality, the girls must confront what really happened in the woods all those years ago—no matter how monstrous.

With all the intensity and whiplash turns of Gone Girl and One of Us Is Lying, this engrossing psychological thriller by New York Times bestselling author Lauren Oliver is an unforgettable, mesmerizing tale of exquisite obsession, spoiled innocence, and impossible friendships.

My Review:
Oh, I enjoyed reading this book! I enjoyed the mystery, I enjoyed getting to know these girls, and I enjoyed the short excerpts from the book that inspired so much love from Summer, Mia and Brynn. It all came together so beautifully!

I really enjoyed the back and forth between Mia and Brynn's POV's. They both had different coping mechanisms for dealing with the fact of Summer's death, and that they were blamed for it. Like Brynn pretending to be an addict so she could stay in rehab.

The methods that they had of investigating were limited, given that they were basically pariah in their town. But they had insider knowledge because they had been there. They were Summer's friends, and had the benefit of the book that they were writing together, which was really important!

There was the question when the girls actually entered Lovelorn, was whether they were crazy, it was real and this book was slightly paranormal, or someone was messing with them. Which was a mystery for us, but was only accidentally solved with the solving of the murder for the characters. Which works!

Loved reading this book, it was such a great read!