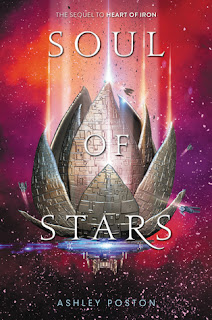 Soul of Stars by Ashley Poston
Expected Publication: July 23rd, 2019
From Goodreads:
The highly anticipated sequel to Heart of Iron, Soul of Stars is a thrilling sci-fi adventure packed with romance, shocking twists, and witty banter, perfect for fans of Six of Crows and Cinder.

Once Ana was an orphaned space outlaw. Then she was the Empress of the Iron Kingdom. Now, thought dead by most of the galaxy after she escaped from the dark AI program called the HIVE, Ana is desperate for a way to save Di from the HIVE’s evil clutches and take back her kingdom.

Ana’s only option is to find Starbright, the one person who hacked into the HIVE and lived to tell the tale. But when Ana’s desperation costs the crew of the Dossier a terrible price, Ana and her friends are sent spiraling through the most perilous reaches of the Iron Kingdom to stop the true arbiter of evil in her world: an ancient world-ending deity called the Great Dark.

Their journey will take their sharp-witted pilot, Jax, to the home he never wanted to return to and the dangerous fate he left behind. And when Robb finds out who Jax really is, he must contend with his own feelings for the boy he barely knows, and question whether he truly belongs with this group of outcasts.

When facing the worst odds, can Ana and her crew of misfits find a way to stop the Great Dark once and for all? 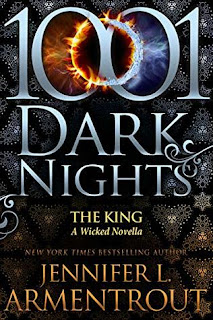 As Caden and Brighton's attraction grows despite the odds stacked against a happily ever after, they must work together to stop an Ancient fae from releasing the Queen, who wants nothing more than to see Caden become the evil Prince once feared by fae and mortals alike. 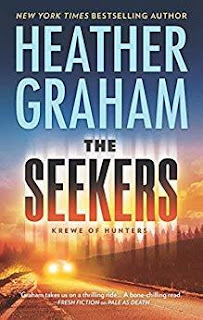 The Seekers by Heather Graham
Expected Publication: July 23rd, 2019
From Goodreads:
THE TRUTH IS SCARIER THAN FICTION

Keri Wolf has joined the crew of The Seekers, a show that searches for paranormal phenomena, as they explore a supposedly haunted old inn on the road between Philadelphia and Harrisburg. The place is famous for its warm welcome—and infamous for being the site of an ax murder rampage in the 1920s. They’ve barely begun when a very real dead body is discovered in the basement. As a nonfiction author, Keri is supposed to be the rational one, but she can’t explain a terrifying apparition that seems to be both a threat and a warning.

Former detective Joe Dunhill knows what she’s going through—the strange gift of being able to see and talk to the dead is a struggle he shares. A new member of the FBI’s Krewe of Hunters, he’s on the team investigating the disturbing death. The town is steeped in old-fashioned superstition, and the deeper Joe and Keri plunge into the dark secrets of the inn, the closer they get to a devastating truth. Will a bloody history be repeated? Or can the spirits of the past reach out to stop a killer?

Yeah, some really great books, authors and series! I can't wait for them to come out and to read them! What about you guys? Happy reading!
Posted by Louisa @ Words I Write Crazy at 6:00 AM