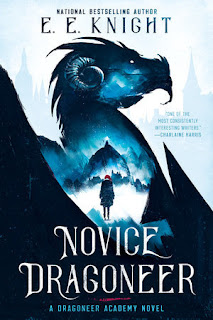 From Goodreads:
In the first book in an exciting and charming new coming-of-age fantasy series from the author of the Age of Fire series, an impoverished girl enters into a military order of dragonriders, but her path won't be as easy or as straightforward as she expected.

Fourteen-year-old Ileth grew up in an orphanage, and thanks to her stutter was never thought to be destined for much beyond kitchen work and cleaning. But she's dreamed of serving with the dragons ever since a childhood meeting with a glittering silver dragon and its female dragoneer. For years she waits, and as soon as she is old enough to join, Ileth runs away to become a novice dragoneer at the ancient human-dragon fortress of the Serpentine.

While most of her fellow apprentices are from rich and influential families, Ileth must fight for her place in the world, even if it includes a duel with her boss at the fish-gutting table. She's then sent off to the dragon-dancers after a foolish kiss with a famously named boy and given charge of a sickly old dragon with a mysterious past. But she finds those trials were nothing when she has to take the place of a dead dragoneer and care for his imprisoned dragon in enemy lands. . .

My Review:
This book was so fantastic to read! I don't read much traditional fantasy, I'm more YA, it was pretty awesome to read this book! It's not dense in the writing, but there's 500 pages and 19 chapters. There isn't a huge cast of characters, but there were some that I had a hard time remembering where they'd been previously introduced, of what their name was. But so enjoyable to read!

This world is pretty interesting! This world of dragons and their dragoneers was fascinating, and there were hints of the history of the world, mentions of a fallen country/empire, that seemed to have a lasting impression of the current cultures. There's some politics, because of the whole "imprisoned dragon" thing, and they aren't easy waters to navigate.

I really enjoyed Ileth's journey being a novice. It isn't easy, and she faces a few additional struggles because she grew up in an orphanage. But there's some kind of secret there, because I have a suspicion about her dad...

The journey that Ileth goes on, from starting at the Academy, she has a ton of road blocks in the way. And with a pretty awful purity culture, that a kiss that she didn't initiate could've gotten her kicked out, yeah, sometimes I broiled at some of the unfairness. She had a way of getting into situations, and then finding bizarre ways out getting out of them! So great to read!

I really enjoyed this book, and I can't wait to see where this series goes!