Week 13 Review: How to Love Your Elf 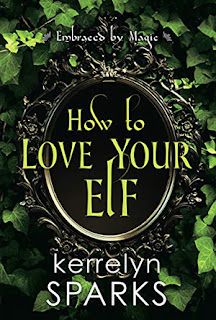 From Goodreads:
Following the success of Kerrelyn Sparks's HOW TO TAME A BEAST IN SEVEN DAYS, SO I MARRIED A SORCER and EIGHT SIMPLE RULES FOR DATING A DRAGON, HOW TO LOVE YOUR ELF is a winning combination of high fantasy and romance, sure to please the New York Times bestselling author's legions of fans.

In another time on another world called Aerthlan, there are five kingdoms. Four of the kingdoms extend across a vast continent. The fifth kingdom consists of two islands in the Great Western Ocean. These are the Isles of Moon and Mist. There is only one inhabitant on the small Isle of Mist--the Seer.

Twice a year, one of the two moons of Aerthlan eclipses the other, or as the people call it, embrace. Any child born when the moons embrace will be gifted with a magical power. These children are called the Embraced, and traditionally, the kings on the mainland have sought to kill them. Some of the Embraced infants are sent secretly to the Isle of Moon, where they will be safe.

For many years, the Seer predicted continuous war and destruction across the four mainland kingdoms. But not any more. Now he claims a wave of change is sweeping across Aerthlan, change that will bring peace to a world that has known violence for too long. And it is happening because of five young women from the fifth kingdom--Luciana, Brigitta, Gwennore, Sorcha, and Maeve.

The women were hidden away as infants on the Isle of Moon, and there, they grew up as sisters. They knew not where they had been born, nor if they had any family. They only knew each one of them was Embraced. This is Sorcha's tale.

My Review:
Oh, it was a lot of fun to be back in this world! I'm glad that we're going to get all 5 of the sister's stories, because they all deserve to get happy endings! And Sorcha is such a great character-she puts on a brave front, but is scared of loving anyone else, for fear of losing them. Not fun!

I really enjoyed Sorcha and Woodsman, whose name we don't get till further in, because yeah, it's kinda a spoiler. But there's a bit of a pattern in this series, about hidden identities and connections to the ruler. I enjoyed finding out what that was for this book!

There are several events that happen regarding the Five. Like, we find out a pretty shocking reveal, that is going to be interesting to deal with! And we find out the identity of another member. So there's only 2 that we don't know, I think it's mentioned.

We're left with a uncertain note with Brody, and since he and Maeve are the stars of the 5th and I think final book, well, certainly means that that trouble is going to be part of his story, and I can't wait for that! I know it's going to be a different, since all 4 mainland countries are ruled by her sisters, so Maeve probably won't end up a ruler, unless it's for shifters or something...

This was a fantastic read, I enjoyed it so much, and I can't wait to see how it all ends!