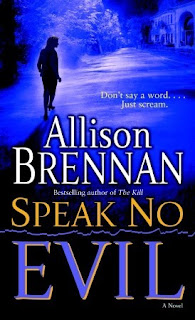 From Goodreads:
Silence is deadly.
The murder of eighteen-year-old Angie Vance was exceptionally vile–her mouth was sealed with glue, an obscenity scrawledwas across her skin, and she was suffocated in a garbage bag. The killing seems personal, so police detective Carina Kincaid focuses her efforts on the victim's much older ex-boyfriend, Steve Thomas. But without physical evidence, Carina can't make a collar or a case. She also can't stop Sheriff Nick Thomas, the prime suspect's brother, from conducting his own unwelcome investigation. Though Nick is still scarred and unsteady from a recent confrontation with a serial killer, he's determined to prove his brother’s innocence. But his confidence is shaken when he learns of Steve's dark side, and when a friend of the murdered girl meets a similarly gruesome fate. With no time to lose, Carina and Nick work together to trap a psychopath, before another unlucky woman faces an unspeakable end.Evil has spoken. Now see what it can do.

My Review:
Oh, what a great mystery! I mean, the bad guy was completely creepy to read, and aggravating! Because he's evil, and he didn't really have to be. But then we wouldn't have this wonderful book if he wasn't, so I guess that's something.

But this book has some pretty gruesome, the kills, how they were treated before they were killed, how they were left...not pretty. But then there's Carina and Nick to solve the crime, so nobody else falls victim to the bad guy. Because their end would not be pleasant at all.

Loved how they solved the case, with great detective skills, and a bit of luck! Because if they'd missed one part, that was pretty crucial, well, things would'v been quite a bit different, and that wouldn't have been the best book, because the characters would'v have been who they were.

I really enjoyed this book, can't wait to read more of this world!!!