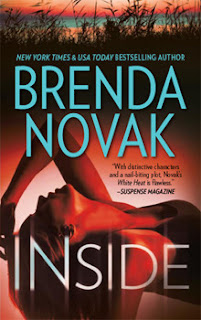 From Goodreads:
Virgil Skinner served fourteen years for a murder he didn't commit. He's finally been exonerated, but he can't escape the gang he joined in order to survive. They'll do anything to keep him from telling what he knows. And if they can't get to Virgil they'll go after his sister and her kids.

The California Department of Corrections needs someone to infiltrate another gang, one that's taking control of the state's most notorious supermax. Virgil agrees to do it under an alias—in exchange for his sister's protection.
Chief Deputy Warden Peyton Adams is opposed to having Virgil in her prison. How will she protect him if things go bad? Besides, she's far too attracted to him; she might even be falling in love with him. That makes her all the more desperate to keep him safe—and it gives him someone else to lose.
My first review of Inside
My Review:
Oh, it was such such a delight to read this book again! I loved being with these characters, the mystery of who actually put the hit on the judge, and the romance, and the betrayals, and how did they get the information of where Laurel was?

I really hated the one guy, because he actually thought that just because Peyton was with Virgil, that she'd want to be with him, no problem. And yeah, I just hated that, because that's how little he thought of Virgil and Petyon, and of how highly he thought of himself. He totally deserved more then a prison sentence!

Or the correction's officer, who wanted to date her, too, but he worked at the same place as her, which is/was against her dating policy, and that he recently was reprimanded for the use of extreme force, and there was an investigation into that, well, and that he was actually working for the bad guys? Not cool!

Rex and Laurel, the potential couple, but not really, since he's not the hero of her book, were really great, the few scenes they had together, then the ones that were separate, yeah, I really enjoyed them! Even if they're not going to be a romantic couple in the next book, oh, well.