All About You: Review and Giveaway 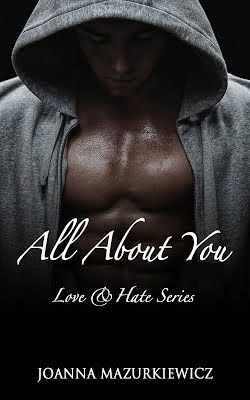 From Goodreads:
I start hating Oliver just after his older brother Christian’s death. I drag him down a road of humiliation and pain to try to cope with what his brother did to me.

A few months after Christian’s passing, Oliver leaves town, and for the next two years, he is absent from my life. The demons claw their way back in, and I must learn to live with the secret that has destroyed me.

Now I'm starting a new life, away from Gargle and away from my past, but everything crashes when I see Oliver the first day at university. It’s clear that many things have changed since we've been apart. Now he is captain of the rugby team and the most popular bloke on campus.

Then he makes a bet and gives me an ultimatum: I leave Braxton forever and start somewhere else, or I stay and play his game… because he’s never forgotten that it was me who ruined his life two years ago.

My Review:
I have to say, that if I hadn't known that there was going to be a sequel, I'm not totally sure that I would've made it through this book. Mostly, because I read the last 2 pages when I was only a little bit into the book. So yeah, that edgy feeling, that I was going between frantic times of reading, and times of excessive energy that meant that I had to take a break.

Yeah, my family should be grateful that they weren't here while I was reading this book, because they hate when I make sounds while reading. Which is something I do in the exciting moments like when the characters have a significant moment, or for the awkward moments you know are coming. I have a, well, love/hate relationship with those moments!

There were a lot of awkward moments in this book! After all, there's the complicated past, of her tormenting him because of his brother, and now, he's paying her back, and it's almost blow for blow, pranking her, from the rumours, to when she invited him to a Halloween party that was no costume-but his said for him to be a vampire. That lined up with a guy making a date with her, and telling her of a PJ party, taking her there, and it wasn't one, and the guy was acting on Oliver's instructions, and told her she wasn't a good kisser. Yeah.

And that ending! Wow, that was an emotional roller coaster, and I can't believe that he did that, that his friends were videotaping that. I wish that she'd tell him about that night, on camera, so that he knew, that they all knew, what was really going on, and be ashamed, because what they were doing was incredibly awful!

I can't wait for the next book, I need it in my hands, so I can see Oliver grovel, because he needs to do that!

Bio:
Joanna Mazurkiewicz was born in Poland. She moved to United Kingdom when she was only nineteen and just finished high school. She had aspired to be a writer upon completion of the Harry Potter series but also enjoyed reading books like ‘Gone with the Wind’, ’Animal Farm’ and ‘The doll’. She graduated from Swansea University with a bachelor degree in American Studies. While studying in the UK she made a decision to start writing fiction in English.


The “Whispers of the Sprite” is her first debut novel and she is currently working on other projects. Joanna lives in Cowbridge, a small town in South Wales near Cardiff with her boyfriend Bruce. She enjoys cycling around Welsh countryside some of which has become the settings in her first series.