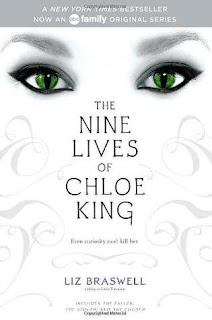 From Goodreads:
Chloe King is a normal girl. She goes to class (most of the time), fights with her mom, and crushes on a boy…or two. But around her sixteenth birthday, Chloe finds that perhaps she isn't so normal after all. There's the heightened night vision, the super fast reflexes – oh, and the claws. As she discovers who she is – and where she comes from – it is clear she is not alone. And someone is trying to get her.

Chloe has nine lives. But will nine be enough?

My Review:
This was an awesome book! Well, technically, 3 books, seeing as it's the whole trilogy! I wish that it hadn't taken me this long to read this book, because I really enjoyed the TV show, so yeah, it would've been nice to have been experiencing them both close together!

I loved how Chloe grew over these books, from a girl who while not belonging with the popular group, or the loners, was part of a close knit group of 3, to the leader of a species that she's only really recently learned that she's a part of. Oh, and dealing with people trying to kill her left and right!

And yeah, there's a lot of romance, because there's the guy who's a great kisser, but not very smart, and the guy who she has a great time with who's like, super smart, but won't kiss her. Oh, and there's the stranger that she almost got to 2nd base with in the parking lot of the club, and then a few days later, was sick, dying. Yeah.

I really enjoyed all these characters, her best friends who started dating each other after her 1st death, all 3 of her guys, Kim, and Sergei. Oh, and the assassin dude. And how the groups, the Mai and the Tenth Blade, didn't utilize the police, but Chloe did. That was pretty great!

I really enjoyed these books, this series, it was awesome, and yeah, I'd have loved a 4th book, but it ended nicely!