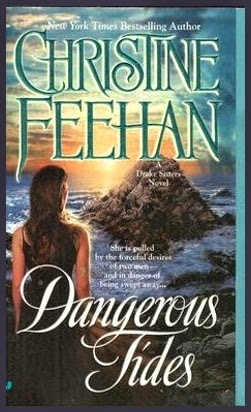 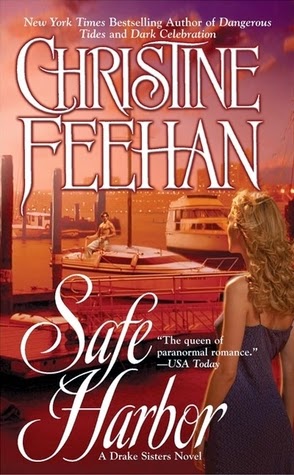 From Goodreads:
With her sensual blend of paranormal romance and breathless suspense, New York Times bestselling author "Christine Feehan boldly goes where no writer has ever gone"*. Now she introduces Libby Drake, of the magical Drake sisters—each mysterious, gifted, and enchanted by prophecies of love…

Dr. Libby Drake is sensible and practical. To her more adventurous sisters, she's always been the "good girl." Certainly not the kind to attract the attention of a genius like Ty Derrick—until a tragic accident leaves the handsome biochemist at her mercy.

Acting on her uncanny ability to heal, she stirs in the reawakened Ty his own long-suppressed desires for the woman who saved his life. But he's not the only man with designs on Libby Drake. Her miraculous and selfless power has also captured the attention of a dangerously influential admirer. He's pursuing the elementally gifted beauty for his own wicked purpose. And he's willing to go to deadly lengths to make it happen.

From Goodreads:
One of seven daughters in a line of extraordinary women, Hannah Drake has been the elusive object of affection for Jonas Harrington for as long as the rugged sheriff can remember. If only the stunning supermodel was driven by a passion other than her career. But Jonas isn't the only one with desires for Hannah.


From the shadows has emerged a vengeful figure who stalks the beauty with one terrifying purpose: to strip her of all she is and destroy her. Only one man was destined as her protector. Now, out of a storm of danger, Jonas must guide the woman he loves from a sinister darkness that threatens not only Hannah, but the entire Drake family.

My Review:
Oh, how I loved these books! I mean, I've been meaning to read Hannah's book for forever, because I wanted to see Jonas learn about how Hannah's shy and has panic attacks, and yeah, I had to read in order, so yeah, I got to read Libby's book, too!

I enjoyed the romances in both these books, that Ty doesn't feel like he can love, or be loved, and how Jonas has been in love with Hannah for most of his life, and yeah, they were awesome romances, and the marriage issue, how Ty just buys a house and a ring, and has a hard time actually asking Libby. And how Jonas pretty much does the same thing.

Loved the mystery, that there were a lot of suspects as to who was trying to kill them, and who it turned out to be, and then in Safe Harbor, it was more dealing with Hannah's recovery, and yeah, that brought up almost-tears, especially the letters that her sisters wrote to her, and yeah, they were just so sweet!

Yeah, the endings on these books! From the emotionally ending what with Ty having to deal with the fact that his cousin, Sam, betrayed him, to Jonas telling Hannah, that the wish that he made on the globe in The Twilight Before Christmas, was for her to be with him, that was so sweet!

Loved these books so much, now to read Joley and Elle's stories, and then the Sisters of the Heart series! My copy of Air Bound wants to be read!