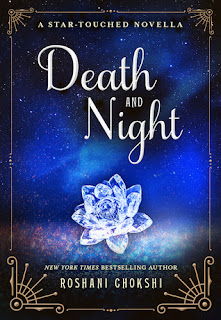 From Goodreads:
Before The Star-Touched Queen there was only Death and Night.

He was Lord of Death, cursed never to love. She was Night incarnate, destined to stay alone. After a chance meeting, they wonder if, perhaps, they could be meant for more. But danger crouches in their paths, and the choices they make will set them on a journey that will span lifetimes.

My Review:
Reading this novella was so freaking awesome! It's been a long time since I read The Star-Touched Queen, but it's been more recent that I read A Crown of Wishes. So it was so fantastic to be in this world again, with these amazing characters again!

One really big plus of this book, was that we got the POV of Death. He's such a big part of this series, and to have his voice, his thoughts, that was really fantastic! And that's not including the fact that it's the story of the start of his relationship with her!

The whole idea of this story, of their beginnings, was really amazing! I'd forgotten so many details, it was great to have this story, and give us more of a background, to know what had gone on. Just utterly fantastic to read!

And oh, that ending! That hurt, a lot! After all that they'd been through, well, we know what's going to happen to them in the future! So oh, that ending hurt, even it was a good hurt, because we know it's going to be alright in the end!

I absolutely loved reading this book, it was a fantastic addition to the series!