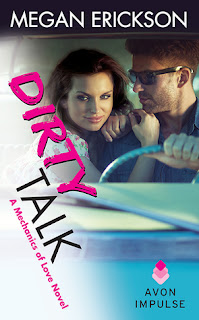 Brent Payton works hard, plays hard, and has earned his ladies' man reputation. But he's more than just a good time, even though no one seems to see it. Until a gorgeous brunette with knockout curves and big, thoughtful eyes walks into his family's garage and makes Brent want more.

Ivy Dawn and her sister are done with men, all of them. They've uprooted their lives too many times on account of the opposite sex, but that's over now. The plan seems easy until a sexy, dirty-taking mechanic bursts in Ivy's life and shakes everything up.

Brent can't resist the one person who sees past his devil-may-care façade, and Ivy finds it harder and harder to deny how happy he makes her. But she has secrets of her own and when the truth comes out, she must decide if she'll run again or if she'll take a chance on forever.

My Review:
Yeah, I just had to read this book! It was so awesome and amazing, and yeah that I could read it just after Dirty Thoughts! But boo that I now have to wait to read Dirty Deeds, I want it now! But I don't have a copy, and I'm doing things in a way that makes sense to my rational brain, but not my reader brain!

I really enjoyed the relationship between Ivy and Brent. Ivy's been burned before, and Brent used to be something of a playboy. But their relationship together worked either despite or in because of that. So yeah, that was great!

Of course that relationship had it's ups and downs, every of them do. As one of them screwed up, got scared, basically the meat of the story. I just really enjoyed them together, they were just so freaking great together!

Loved just everything about this book, from his dog with the cute name who won't answer to any other name. And Ivy's daughter. This series for me is about love and relationships, family, It was just so great to read!

Yeah, loved this book, now to wait to read the final book in this series, which sucks, but the anticipation will make it all the more better!