Week 18 Review: A Court of Wings and Ruin 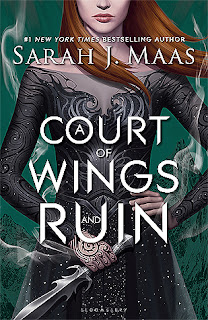 From Goodreads:
Looming war threatens all Feyre holds dear in the third volume of the #1 New York Times bestselling A Court of Thorns and Roses series.

Feyre has returned to the Spring Court, determined to gather information on Tamlin's maneuverings and the invading king threatening to bring Prythian to its knees. But to do so she must play a deadly game of deceit-and one slip may spell doom not only for Feyre, but for her world as well.

As war bears down upon them all, Feyre must decide who to trust amongst the dazzling and lethal High Lords-and hunt for allies in unexpected places.

In this thrilling third book in the #1 New York Times bestselling series from Sarah J. Maas, the earth will be painted red as mighty armies grapple for power over the one thing that could destroy them all.

My Review:
Wow, I don't think you can really contain into words the love that I had for this book. I needed to read it so much, I checked to see if it was available on the 1st when it was the 2nd elsewhere in the world, and it was, so I had to read it, which is why I read it before it came out in my area!

After over a month of really desperately wanting this book, obsessing over what was going to happen, what I wanted to happen, and wondering how it was all going to end, well, it's hard for the book to live up to all that. Don't get me wrong, this was still a top read of 2017. It just go in the direction that I hoped and imagined for. It was still so fantastic!

The first part was so evil! No Rhysand, besides a few mate bond talks, being in the Spring Court with all these people who had seen her suffering-and decided that Tamlin was more important. Gah! Though there were a few good people, and some awesome moments! Like in chapter 8, where Feyre and Lucian did something to the King's representatives, and Tamlin is berating them, and then we find out what they did, and it was just absolutely hilarious!

Tamlin did some really horrible things. Looking back, he's done some pretty horrible things throughout the series, he did nothing for almost 49 years, he was weak, and then he treated Feyre awfully, after all that she did to fight for him. And then he did some pretty top-level bad things in this book. But wow, I didn't expect what did happen!

In this book, we actually meet the other High Lords. Which was really interesting, because of the 7 of them, we really know Rhys, we know Tamlin, and we met the Summer Lord, whose name I've forgotten. Which leaves 4 others, and 4 other courts. And while the courts, we didn't learn too much about, the High Lords, we did! And there were some really interesting things-mostly regarding the Autumn Court. Like, Lucien and his mom. And the oldest brother. Really fantastic!

One thing that I'm wondering, is if the guy with the castle and the lake who cursed the last Queen, is the older brother of the twins, the Weaver and the Carver. Because the details, as far as I can recall, matched up. Hopefully I'll learn whether I'm right or wrong in future books!

I didn't know what to expect from that ending. But oh, was it blood-soaking and violent! There were a lot of losses-though two of them, the Weaver and the Carver, well, they were working for the good side, and with their deaths, meant less bad guys died at their hands. And the surprise appearances! The losses!  And the sacrifices! Amren, Rhys! But yeah, that ending was absolutely fantastic! I just wish we had more!

This is only the 3rd book in this series-we're going to get a few more, set both before and after these 3. And I only hope that we'll see more of the Court of Dreams and Dreamers, because their love lives, besides Feyre and Rhys, have so many stories to tell! I wants it!

Absolutely loved this book, and I just need 2018 to come faster so I can have more of this series!

Author: Sarah J. Maas
Series: A Court of Thorns and Roses #3
Read: May 1st, 2017
Source: Bought
Reason Why: Love her books and this series, and I desperately want to read it! And it's a 2017 Retelling Reading Challenge Book, Prequel & Sequel Challenge 2017 Book and a WoW Book!
Publisher: Bloomsbury USA Childrens
Published: May 2nd 2017