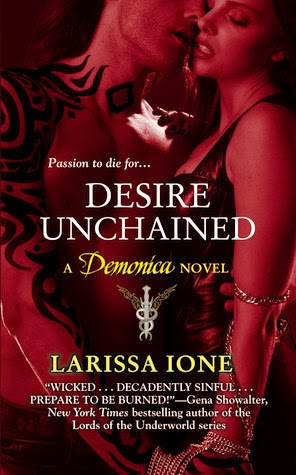 From Goodreads:
Pleasure is their ultimate weapon . . .

Runa Wagner never meant to fall in love with the sexy stranger who seemed to know her every deepest desire. But she couldn't resist the unbelievable passion that burned between them, a passion that died when she discovered his betrayal and found herself forever changed. Now, determined to make Shade pay for the transformation that haunts her, Runa searches for him, only to be taken prisoner by his darkest enemy.

A Seminus Demon with a love-curse that threatens him with eternal torment, Shade hoped he'd seen the last of Runa and her irresistible charm. But when he wakes up in a dank dungeon chained next to an enraged and mysteriously powerful Runa, he realizes that her effect on him is more dangerous than ever. As their captor casts a spell that bonds them as lifemates, Shade and Runa must fight for their lives and their hearts-or succumb to a madman's evil plans.

My Review:
Yeah, this was a really awesome book! It dealt with things brought up in the previous book, like how E was tortured by the vampires when Wraith went over the monthly kill limit, how people thought that they'd seen Wraith when they hadn't, well, yeah. And the reason? Oh, a reason!

Because their brother, Roak, lived! And yeah, that sucks for everyone, seeing as a) he was damaged by the fire, b) he thought the 3 brothers had conspired against him, when it was only Wraith, and so he wanted vengeance on them. And boy, does he cause trouble!

That Roak is alive, made it easy to connect the dots. Like, he took on Wraith's face, and killed, to try and alienate the brothers. He killed Shade's mom, and then Skulk, though Shade only knew of Skulk's death at Roak's hands. Yeah.

I enjoyed how they resolved the curse thing. It was really great that the curse could be passed on to family, not just loved ones in a non-romantic manner. Because that made it taking down two birds with one shot, giving the curse to Roak, so then Shade didn't have the curse, and they stopped Roak!

Yeah, this was a really fantastic book, and with the 2 things that were left open, the poison that Roak stole, and the fallen angel DNA in the guy, yeah, can't wait for Wraith's story!