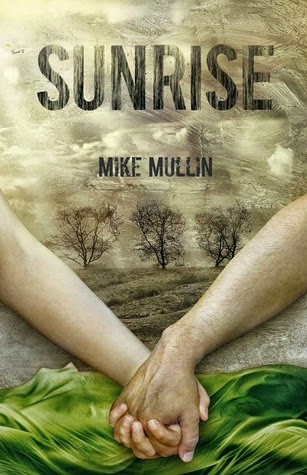 From Goodreads:
The Yellowstone supervolcano nearly wiped out the human race. Now, almost a year after the eruption, the survivors seem determined to finish the job. Communities wage war on each other, gangs of cannibals roam the countryside, and what little government survived the eruption has collapsed completely. The ham radio has gone silent. Sickness, cold, and starvation are the survivors' constant companions.

When it becomes apparent that their home is no longer safe and adults are not facing the stark realities, Alex and Darla must create a community that can survive the ongoing disaster, an almost impossible task requiring even more guts and more smarts than ever — and unthinkable sacrifice. If they fail . . . they, their loved ones, and the few remaining survivors will perish.

This epic finale has the heart of Ashfall, the action of Ashen Winter, and a depth all its own, examining questions of responsibility and bravery, civilization and society, illuminated by the story of an unshakable love that transcends a post-apocalyptic world and even life itself.

My Review:
This was a really fantastic book! Probably one of the hardest to read, because the stakes are so high (and again, that feeling, that the characters were leaving safety for danger which again, made it slight hard to get into this book) and yeah, I read it, and I loved it!

So you know something bad was going to happen. From the election, to sneaking into the town to relive them of supplies that they weren't using, and that Alex and Darla could use. There was a sneaking suspicion that something would go wrong. And it did. And it sucked. But things got better!

I loved the community that they created, with using the wind mills as power, and all that, and how the town grew and grew, that was really fantastic! They had a rough start, but once they got going, well, yeah, that was just perfect!

There are some questions after that ending, for me. Like, who took the truck? Because it was probably someone from Warren, and the Mayor knew that, and then did nothing, which sucked. And did Emily survive being taken as part of the trade? I wants to know!

Favourite lines: "Are you sure this isn't another case of Alex grabbing a lance and charging a windmill?" Could be, but it's needed! "Here's to reentering the 1890s!" Yeah, a working light switch! "'Sure, we got trucks coming out our asses—' 'Must be painful.'" Go you for taking it literally, Ed! "Alex, if you shoot me, so help me, the wedding’s off." Well, that is a pretty good reason to not get married! And we don't want any of those! "Darla and I cut the ersatz cake and smeared it all over each other's faces. I held her tightly and cleaned off her face with my tongue, while Rebecca looked
on in disgust. I thought I was being eminently sensible, though—no sense letting all those calories go to waste, right?" If you wanted to be sensible, you would've put them in nice and not smeared it! "We
needed the pure . . . shit . . . for Ben's crazy project. Three other teams were doing the same thing in other greenhouses. Ben wanted a—there's really no other word for it—shitload of human feces." Well, at least there's a good reason for it-mounting a rescue for Ed! "You took the city without us? Damn, Chief, I knew you were a badass, but that's just ridiculous." Yeah, it would be if he actually had, but he is a badass! "How many 5'4" redheaded knife fiends could there be in northern Illinois?" Well, hopefully only one, seeing how much damage this one has done! "Uncle Paul, Dr. McCarthy, and Nylce Myers ran for the council, mostly because I threatened them with never-ending latrine duty
if they didn't." Well, that was mean, but effective! "'I already worked it out with your uncle. I appointed him vice-vice mayor. I'm going.' 'There’s no such thing as a vice-vice mayor!' There is now.'" Well, there's a good reason, so yeah for Darla's creativity!

So fantastic, such a great ending to the series, and I hope for more books by Mike Mullin!