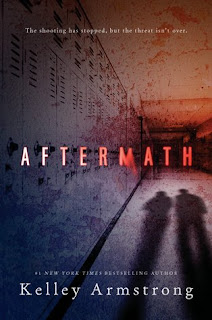 From Goodreads:
Three years after losing her brother Luka in a school shooting, Skye Gilchrist is moving home. But there's no sympathy for Skye and her family because Luka wasn't a victim; he was a shooter.

Jesse Mandal knows all too well that the scars of the past don't heal easily. The shooting cost Jesse his brother and his best friend--Skye.

Ripped apart by tragedy, Jesse and Skye can't resist reopening the mysteries of their past. But old wounds hide darker secrets. And the closer Skye and Jesse get to the truth of what happened that day, the closer they get to a new killer.

My Review:
Yeah, I loved reading this book! And because it's a Kelley Armstrong book, of course I had to read it on my birthday, I always make sure to read special books on important-to-me days! And yeah, for this book which kinda starts lower than the others given its subject matter, it needs that boost, you know?

I felt bad for Skye. The brother she knew would never have become a school shooter. And yeah, he didn't actually kill anyone, but she wasn't allowed to mourn him, because he would've. And she couldn't defend him, or try to make excuses, because that wouldn't be fair to the real victims. None of this is what I believe, but it's what others did, and forced Skye to behave like.

The school administrator guy really got on my nerves! That he would believe that Skye would set up scenarios to make it look like she was being bullied, and not investigate, even when events increased in severity, yeah, not cool! And then when he tried to pretend he hadn't heard Jesse's confession regarding drugs and sports, yeah, he really shouldn't have a job anymore! That's the exact attitude/actions of a person who should not work in a school environment!

One thing that I really love about Kelley Armstrong's main characters, are that they're strong with practical smarts. They're the opposite of the characters that you yell at at horror movies for making the wrong decisions. And Skye shows that multiple times, though there is one occasion where she let her emotions get the best of her. Though it didn't have a huge negative impact, which was good.

Is it irony when you fear something, and because of that fear, your actions cause that fear to play out? Because that's what happens in this book, and to the bad guy, so it's kinda like justice, the worst fear come true, thing. But it doesn't negate the harm caused by their actions!

This book was really incredible, and I wish that its subject matter didn't matter-that there would be no school shootings. Maybe soon there won't be any with gun control. Hopefully. Human lives deserve it.

Author: Kelley Armstrong
Read: May 24th, 2018
Source: Bought
Reason Why: Love her writing, and it's a SAC 2018 Book and a WoW Book!
Publisher: Crown Books for Young Readers
Published: May 22nd 2018