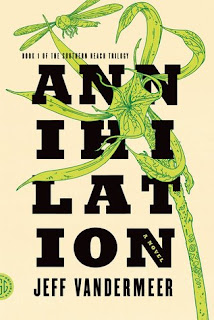 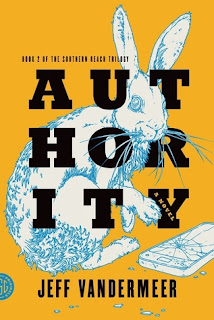 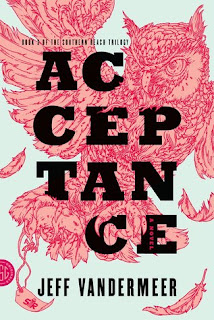 From Goodreads:
Area X has been cut off from the rest of the continent for decades. Nature has reclaimed the last vestiges of human civilization.

This is the twelfth expedition.

Their group is made up of four women: an anthropologist; a surveyor; a psychologist, the de facto leader; and our narrator, a biologist. Their mission is to map the terrain and collect specimens; to record all their observations, scientific and otherwise, of their surroundings and of one another; and, above all, to avoid being contaminated by Area X itself.

They arrive expecting the unexpected, and Area X delivers — they discover a massive topographic anomaly and life forms that surpass understanding — but it's the surprises that came across the border with them, and the secrets the expedition members are keeping from one another, that change everything.

From Goodreads:
For thirty years, a secret agency called the Southern Reach has monitored expeditions into Area X — a remote and lush terrain mysteriously sequestered from civilization.

After the twelfth expedition, the Southern Reach is in disarray, and John Rodriguez (aka "Control") is the team's newly appointed head. From a series of interrogations, a cache of hidden notes, and more than two hundred hours of profoundly troubling video footage, the secrets of Area X begin to reveal themselves — and what they expose pushes Control to confront disturbing truths about both himself and the agency he's promised to serve.

From Goodreads:
It is winter in Area X. A new team embarks across the border on a mission to find a member of a previous expedition who may have been left behind.

As they press deeper into the unknown — navigating new terrain and new challenges — the threat to the outside world becomes more daunting.

In Acceptance, the last installment of Jeff VanderMeer's Southern Reach Trilogy, the mysteries of Area X may have been solved, but their consequences and implications are no less profound — or terrifying.

My Review:
This series was so freaking weird! And I loved it! It also had very dense writing, which was a little hard to read, and I didn't get all the references, but yeah, it was a great quirky quality to these books! They were just so enjoyable!

I heard about this series because I saw a trailer for the movie, and it looked really good, so I watched it and really enjoyed it, so I was really excited to read this series. There were a ton of differences, and basically different stories, but I enjoyed both mediums!

The writing in these books was very, very, very dense. Sometimes I'd have to read something over two or three times, and I still sometimes didn't quite understand what was going on. Maybe that was because the characters didn't know? There were a ton of mysteries, and the ones that were solved, were more answers seen out of the corner of your eye kind of thing.

After the end, I still have a few questions. Like that weird scent that Control smelled in Authority, I think it might've been Whitby, but I'm not totally sure. Was the lot that the Ghost Bird appeared in the same one that the Biologist went to? Was there two different entities like as was suggested, one that created Area X, and one that created the boundary? What happened with the S&SB and the government involvement with Control's mom and grandfather? And what was the Biologist's name?

These books were amazing to read, so weird, and so great!