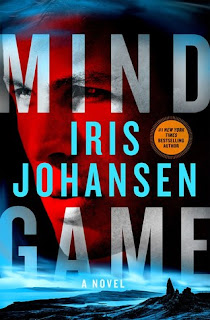 Mind Game takes Jane MacGuire back to Scotland where she continues her search for the treasure she's been chasing for years. But now she's being plagued by dreams of a girl in danger. Who is this girl, and what is she trying to tell Jane? And will Jane figure it out before it's too late—for her and the mysterious young woman? Things are further complicated when Seth Caleb comes back into Jane's life. This time he's the one in trouble, and Jane will find herself pulled unexpectedly into his world as she fights to save him.

With the adventure, intrigue, and explosive energy that Iris Johansen fans love, Mind Game is a high-octane thriller that readers won't be able to put down.

My Review:
Ok, this is a book that has been a long time coming. Caleb first book was Blood Game (which I just realized that his two books now, both have game in the title!) which is like book #10 vs. this is book 22. Well, there was also the 2013 Eve Trilogy, which she had the choice of Caleb or Trevor, chose Trevor, and then he was killed. But now she's healed, and now it's her and Caleb's story!

In this book, we're introduced to Caleb's sister, as in, the one that wasn't killed, and his reason for wanting revenge in Blood Game. I really enjoyed her, and I really hope we'll see more of her in future books, she was so interesting!

For me, there were 3 parts of this story, the beginning where they had to do a rescue, the middle where they were all together, and then the end, where things are all up in the air, and they have a way of getting Caleb to do what they want him to do.

The relationship between Caleb and Jane has grown by leaps and bounds. They work through a lot of the issues that they have, and while other things were going on, like why they're in this situation, and the treasure, finally, but yeah, their relationship was a big deal, and I loved how that all wrapped up!

This book was so fantastic, and I can't wait for more of this amazing series!