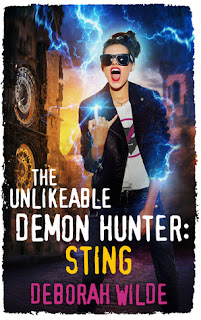 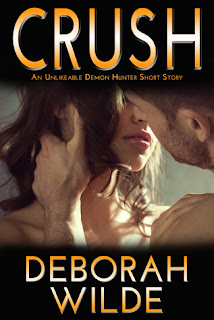 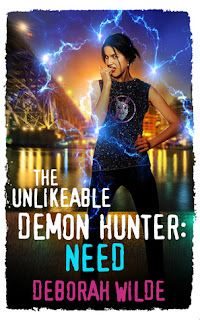 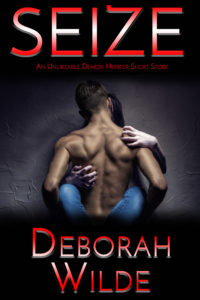 After a bumpy start as the only female demon hunter in the top secret Brotherhood of David, Nava Katz heads to Prague for her first undercover mission: unmasking a demon movie star. She'd be all kinds of thrilled if it weren't for the fact that her fellow hunter-with-benefits, Rohan Mitra, has reclaimed his rock star status and assigned Nava the role of groupie.

Rejecting her "be a good girl and follow orders" directive, Nava unleashes an alter ego guaranteed to hook their celebrity target and drive Rohan crazy. No downside–until she finds herself up against Rohan's past, the Brotherhood's antiquated thinking, and her own identity issues, turning her personal life into the bomb that could blow up the entire operation.

Sparkly and deadly; it's a plan.

From Goodreads:
While closing in on a child-eating demon, Drio crosses paths with a woman who may just out-play him.

From Goodreads:
Less Hopelessly Devoted, more Worse Things I Could Do.

Nava is hot on the heels of a demonic serial killer and finally working with her brother. The assignment should be a dream come true, not a nightmarish power struggle made worse by her twin's refusal to believe there's corruption within the Brotherhood. Nava is determined to find proof of their dirty dealings, even as she risks irrefutably breaking her sibling bond.

Speaking of clocking annoying males upside the head... Nava is also totally over smoking hot rock star and fellow hunter Rohan Mitra. There is a veritable buffet of boy options out there, and this girl is now all-you-can-eat. So when her demon hunt brings her first love, Cole, back into her life, her revenge fantasies for closure-on all fronts-are a go. Except neither her old wounds nor her new ones are as healed as she believes.

From Goodreads:
A summer's night. A cursed diamond. A deadly demon encounter that unlocks deep desires. Told from Rohan's POV.

My Review:
Gah, these books were just so fantastic! I did take me longer then I would've liked to start reading Sting, but that was mostly because I didn't have a copy of Crush, and then I got one of Crush and Seize, and I just had to read them all!

The sexism in these books! That rabbis apparently give thanks that they weren't born a girl, and that guys don't shake hands with females, just in case they were dirty from having their period-and they wouldn't ask about it, so no shaking whatsoever. I really hope that this is not based off of the real world! Nava doesn't let it affect her, though, because she's badass!

The Brotherhood proved to be very awful, from the way that they added her to the Prague mission, to the serial killer at home where her brother constantly tries to take charge, even though she has more field experience. And that the Brotherhood might have a way to control demons, well, lots of things in Need put a strain on their relationship! Oh, and how in the history books, they wrote out the witches role in their beginnings, well, besides a rare mention, scathing that they weren't given everything, instead of being grateful for getting anything at all! Gah! Awful!

There were two big elements in these books. The relationship between Nava and Rohan, which is a roller coaster ride from start to finish, and the hilarity. The one liners that Nava has as well as her smarts! Oh, and the twin war! That was just epic!

These books were really fantastic, and I can't wait for Crave!