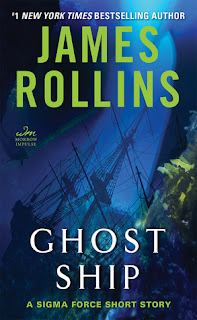 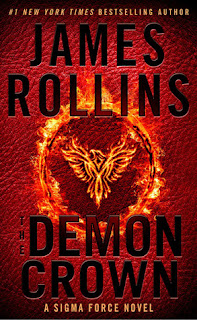 From Goodreads:
From New York Times bestselling author James Rollins comes an electrifying short story, in which the battle over a lost treasure leads to murder, betrayal, and the revelation of a shocking mystery hidden aboard the . . . Ghost Ship

The discovery of a burned body sprawled on a remote Australian beach shatters the vacation plans of Commander Gray Pierce. To thwart an ingenious enemy, he and Seichan are pulled into a centuries-old mystery surrounding a lost convict ship, the Trident. The vessel—with a history of mutiny and stolen treasure—vanished into the mists of time, but nothing stays lost forever.  A freak storm reveals clues scattered across the Great Barrier Reef, but following those clues will lead to bloodshed and savagery, for where this ghost ship is hidden is as shocking as the mystery behind its disappearance. It will take all of Gray's ingenuity and Seichan's deadly skills not only to survive—but to stop an enemy from destroying everything in his path.

From Goodreads:
To save mankind's future, the members of Sigma Force must make a devil's bargain as they join forces with their most hated enemy to stop an ancient threat in this gripping adventure from #1 New York Times bestselling author James Rollins.

Off the coast of Brazil, a team of scientists discovers a horror like no other, an island where all life has been eradicated, consumed and possessed by a species beyond imagination. Before they can report their discovery, a mysterious agency attacks the group, killing them all, save one, an entomologist, an expert on venomous creatures, Professor Ken Matsui from Cornell University.

Strangest of all, this inexplicable threat traces back to a terrifying secret buried a century ago beneath the National Mall: a cache of bones preserved in amber. The artifact was hidden away by a cabal of scientists—led by Alexander Graham Bell—to protect humankind. But they dared not destroy it, for the object also holds an astonishing promise for the future: the very secret of life after death.

Yet, nothing stays buried forever. An ancient horror—dormant in the marrow of those preserved bones—is free once more, nursed and developed into a weapon of incalculable strength and malignancy, ready to wreak havoc on an unsuspecting world.

To stop its spread, Commander Grayson Pierce of Sigma Force must survive a direct attack on the island of Maui. To be there first has always been the core mission of Sigma Force, a covert team forged to be America's front line against emerging threats. But this time, even Sigma may not be able to decipher this deadly mystery, one that traces back to the founding of the Smithsonian Institution.

With each new discovery, the menace they hunt is changing, growing, spreading—adapting and surviving every attempt to stop it from reconquering a world it once ruled. And each transformation makes it stronger . . . and smarter.

Running out of time and options, Commander Grayson Pierce will be forced to make an impossible choice. To eradicate this extinction-level threat and expose those involved, he will have to join forces with Sigma's greatest enemy—the newly resurrected Guild—even it if means sacrificing one of his own.

My Review:
Oh, wow, these books! Ghost Ship was really awesome, giving us a brief look at Gray and Seichan's lives have been like, and then how they made the decision to go to Hawaii-where they are when The Demon Crown starts!

A shipwreck of a mutineer vessel carrying gold, that's pretty cool. What's not cool is killing people to get it! I really enjoyed the fact that a familiar face from Subterranean was a part of this book, since they are in Australia and all!

Let me just say, I really hate, hate, hate snakes. So on one hand, pretty happy they weren't a threat. On the other, their venom apparently can be useful to the medical field. Glad that was only a small part of the story, a point from the story to spring from!

Gray and Seichan have been globe-trotting, basically running from his demons from the events of the last book. In this book, their relationship is steady, and that's really good, they're going to need it, given what happens in this book, and the future it holds!

One of the most terrifying aspects of The Demon Crown was the chapters that we got from the ancient horror. They were just chilling! Since the book isn't out yet, I won't spoil and say what that horror is, but the cover is only an aspect, and more on the human side of the threat, and much easier to deal with!

To be honest, I don't remember a lot about The Seventh Plague, more like snapshots. And Valya, well, lets just say that I'm glad that we got a brief reminder of what her role-and her story-in this book was! Can't wait to see this play out in future books!

I enjoyed how everything wrapped up, how some of the bad guys turned on each other, and others were discovered, though at a cost! The solution to the ancient horror was so elegant, and the big issues were resolved nicely! It was a really fantastic ending!

I just loved reading these books, and I can't wait for more James Rollins novels!