Yeah, we have the cover of Bone Crier's Moon by Kathryn Prudie! 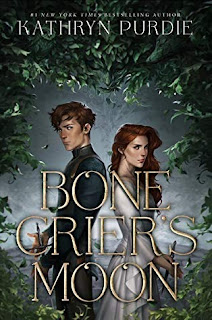 From Goodreads:
Bone Criers have a sacred duty. They alone can keep the dead from preying on the living. But their power to ferry the spirits of the dead into goddess Elara’s Night Heavens or Tyrus’s Underworld comes from sacrifice. The gods demand a promise of dedication. And that promise comes at the cost of the Bone Criers’ one true love.

Ailesse has been prepared since birth to become the matriarch of the Bone Criers, a mysterious famille of women who use strengths drawn from animal bones to ferry dead souls. But first she must complete her rite of passage and kill the boy she’s also destined to love.

Bastien’s father was slain by a Bone Crier and he’s been seeking revenge ever since. Yet when he finally captures one, his vengeance will have to wait. Ailesse’s ritual has begun and now their fates are entwined—in life and in death.

Sabine has never had the stomach for the Bone Criers’ work. But when her best friend Ailesse is taken captive, Sabine will do whatever it takes to save her, even if it means defying their traditions—and their matriarch—to break the bond between Ailesse and Bastien. Before they all die.


Uh, this cover kinda straddles the line of real/not real, but since it's not a close up, that's why it straddles, not crosses, so I like it! Can't wait to read it! What about you guys? Happy reading!
Posted by Louisa @ Words I Write Crazy at 9:57 PM