Week 24 Review: War of the Bastards 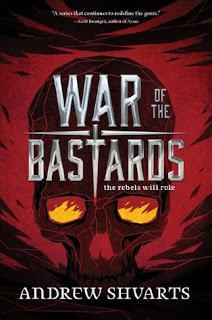 From Goodreads:
A year has passed since the fall of Lightspire. The Inquisitor Miles Hampstedt has usurped the throne and rules Noveris with a blood-soaked iron fist. Tilla and her friends have become hardened rebels in the Unbroken, a band of guerilla fighters hiding out in the fringes of the Kingdom. Tilla is plagued with doubt and regret; Lyriana struggles with the burdens of being a fugitive Queen; Zell atones for his guilt by killing for the cause. And even as they all fight, they know their cause is doomed, that with very passing day Miles' power grows, his army of Bloodmages spreading to cover the continent.

Then a raid on an outpost produces two unexpected prisoners: Lord Elric Kent himself, now a prisoner obsessed with revenge, and Syan See, a strange girl from the Red Wastes. Tilla struggles with the emotional weight of confronting her father, but it's Syan that offers the true revelation. She demonstrates a new incredible kind of magic, and speaks of a secret civilization hidden in isolation in the mysterious Wastes. With Miles' forces closing in, Tilla and her friends (alongside a hostage Lord Kent) set out to make contact with Syan's people, to make an pact that could turn the war. The journey will test their character, forge unlikely alliances, reveal the horrifying true nature of magic, and set in motion a battle that will determine the fate of Noveris itself.

My Review:
Yeah, wow, this book was so excellent! We had action, we had adventure, and we learned more about this world! It was such an incredible book, and a really great ending to the series! I just enjoyed it so, so much!

There is a year between City of Bastards and War of the Bastards, and Tilla has become something of a warrior, and is keeping track of the people she's personally killed. They've changed, hardened, they have more scars, but they're still fighting. Which is good, because things got worse before they got better!

We're introduced to a new character, Syan, and yeah, what she represents, it totally changed their understanding of the world. Because she can do magic, and she wasn't born anywhere near Lightspire. And we got to learn more about their gods, which was pretty awesome, since there was the tomb of them in the last book, meaning that there was some situation there!

That ending, yeah, it had a lot going on. I loved that she was able to heal her relationship with her father, and the change that Lyriana made, politically, yeah, that was a game changer! I wouldn't mind another book set in this world (with new characters, if needed to narrate) to explore those changes, and the threat that they're still facing with the world ending and all!

This book was amazing, and I can't wait to read what Andrew Shvarts writes next!