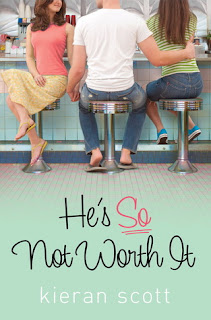 From Goodreads:
After suffering intense humiliation at the hands of her almost-boyfriend and being blindsided by the reappearance of her estranged father, Ally Ryan is relieved to escape to the Jersey Shore. The farther away from Jake, the better. And if blowing off steam means getting cozy with Cooper, a Jersey local, that’s just fine with Ally. Meanwhile, Jake is stuck in Orchard Hill, grounded for the summer due to bad grades and working at the town coffee shop—where Ally’s father is the new manager. Faced with a daily reminder of the girl he did wrong, will Jake rally and change his ways? Or will he give up the chase when he sees Ally with her new fling and realizes she’s moved on? It’s going to be a summer to remember….

My Review:
Ah, the complications in this book! I mean, that's pretty much the best reason to read this book, the back and forth, very mixed, dramatized relations between all these kids, mostly romantic, and yeah, how they all fit in together!

Yeah, Jake was a bit of an ass in the first, the on and off, hot and cold. And that wasn't all his fault, he was influenced by his friends and his family, but Ally didn't deserve that. It's not her fault that her dad lost the money. But she's getting punished, none the less.

Having a summer book in this series is really great, because I mean, it's in school where she has to hang out with her old friends, and now in the summer, she can relax, and maybe move on. But I didn't really like Cooper too much. And Jake wasn't as bad here!

The whole thing with Jake and Ally's Dad are working together? That idea was strange and first, but it allowed them to work together, talk together, and learn about each other, which is a good thing, because it helps her dad know why Ally likes him, and for Jake to understand Ally a bit better!

I really enjoyed this book a lot, and now I can't wait for the 3rd and final book!