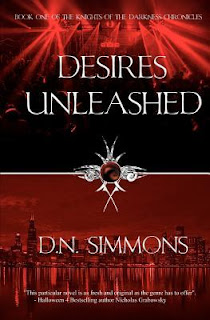 From Goodreads:
Desires Unleashed is the first novel in the riveting, highly-addictive and sexually-charged Knights of the Darkness Chronicles. Experience the heart-pounding thrill of the chase in this electrifying page-turner as you uncover the mystery behind the series of gruesome killings that have been terrorizing the citizens of Chicago.

When a grisly decapitated corpse pops up on a Chicago Street, drained of blood, the highly-trained, government-funded special police force assigned two of their best detectives to the case. S.U.I.T. Detectives Warren Davis and Matthew Eric delve deep into their investigation to discover just who or what is leaving mutilated bodies in public places. They soon realize that the killer or killers is one step ahead of them and if they are going to stop the menace before another innocent human is viciously attack, they are going to need help.

Natasha Hemingway liked her life just the way it was… normal and supernatural-free. The vampires and shape-shifters were just where she wanted them to be—far away from her. All was going well until an unfortunate accident landed her in the hospital. It was then that she discovered she had an ability that could help her save countless lives. All of a sudden, she finds herself thrust into the dangerous and alluring world of the supernatural and into the arms of two very sexy and deadly vampires.

Original, gritty and sprinkled with just the right amount of humor and wit, the Knights of the Darkness Chronicles will suck you in and take you for a ride you won't forget. You don’t want to miss out on this amazing series!

You have to care for these characters, from their love of donuts, to their jobs, to their very lives, they are things that people take for granted, and that's not always for the better!

And then there's the whole romantic conflict, because man, being torn between 2 guys, and vampires at that, well, not something I'd want to experience, but reading about, well, that's another story altogether!

The action in this book, it was astounding, after all, they are cops, and violence is a big part of their world, and with all the dead bodies, and how gruesome they were, that just added to the book, tantalizing, tempting, and yeah, just really great!

This was an awesome book, really enjoyed it, so I hope you guys go on and check it out!

Bio:
I was born in the little, but big bustling city of Chicago, Illinois. I still live there today, and loving every second of it ... Except for those harsh cold winters. I started writing short horror stories when I was eleven years old. It wasn't until 2004 that I decided to take the plunge into the professional literary world when I wrote Desires Unleashed.

I love the supernatural world, I've always found it fascinating, especially vampires and shape-shifters. It was my love of the genre that motivated me to create the story I had always wanted to read. I published it, hoping there were other people out there who would be entertained by that same story. I love to entertain people, to offer them that fantasy world they can escape into filled with wonders and good times. I know I appreciate the escapism I've delved into when reading a good book.

More about me, I'm a couch potato by nature, and I love watching great movies and television shows. I also love listening to music of all genres. Some of my other hobbies include roller blading, biking, composing classical music, writing poetry, cooking, playing video games and playing Mobsters on Myspace. 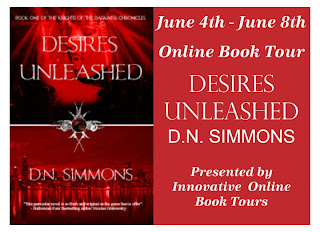