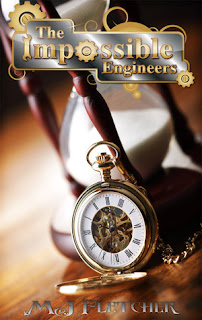 From Goodreads:
Chloe Masters's world changes in a heartbeat and all she did was touch a doorknob.

James Nightshade has been on Chloe's mind since the day she met him. Arrogant and frustrating, she thought she had put him behind her when she chose Michael Slade.

When the secret she is seeking leads to questions about the death of Nightshade's former girlfriend, she has no chose but to bring him into the investigation. A move she will come to regret.

Danger awaits them around every corner as they search for answers. In the end a choice will need to be made, but is Chloe strong enough to make it?

My Review:
I really enjoyed the first book! That enjoyment didn't totally translate over to this book, but I did really like this book a lot! Just not as much as the first book. But I was really glad to read it, because I want to know what's going to happen next in this series!

This was a great continuation of the last book, with a lot going on, and a lot to learn, and there was always something going on, bit, small, in-between, of all various sorts of things! So great, and it was pretty darn entertaining!

I really enjoyed having this time with these characters so more, because they were just so interesting, and I wanted to know more about them, and this world that they were in! And we learned a ton, while there were emotional stuff going on, too!

I really enjoyed where it ended, because it was a pretty big ending, and this book deserved it! But it did have a few grammar issues, like the last one, that got to be a bit annoying, that I wish had been corrected, and hopefully they will be!

Bio:
MJ Fletcher was born in New Jersey and now lives by the beach with his very understanding wife and daughter. He has been writing since he first stapled pages together as a child and called them a book. He finally realized his ambitions when his comic book series Adam Zero The Last Man of Earth was published by Ronin Studios. His other comic book work includes Digital Webbing Presents and The Hero Initiative. His first novel The Doorknob Society released in 2012 was nominated for a Cybil award in the young adult category. He has continued writing the Doorknob Society Saga his rollicking steampunk adventure series as well as working on numerous other writing projects.