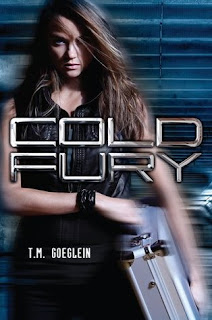 From Goodreads:
Sara Jane Rispoli is a normal sixteen-year-old coping with school and a budding romance--until her parents and brother are kidnapped and she discovers her family is deeply embedded in the Chicago Outfit (aka the mob).

Now on the run from a masked assassin, rogue cops and her turncoat uncle, Sara Jane is chased and attacked at every turn, fighting back with cold fury as she searches for her family. It's a quest that takes her through concealed doors and forgotten speakeasies--a city hiding in plain sight. Though armed with a .45 and 96K in cash, an old tattered notebook might be her best defense--hidden in its pages the secret to "ultimate power." It's why she's being pursued, why her family was taken, and could be the key to saving all of their lives.

My Review:
This was one of the best books read of 2013, which means that this year is off to a great start! I enjoyed this book, so, so, so much, it was gritty and entertaining, and every word was a pleasure to read, and the pages just went by too quickly! Good thing it's a series!

I loved reading about Sara Jane Rispoli, and how she discovered the family secrets when the rest of her family is kidnapped by what turns out to be very strange creatures. She was a kick ass girl, and it was so awesome reading about her!

And then where the title came from, the Cold Fury, that is a secret that her family held, was utterly interesting! I mean, something that makes the mob want to hire you to keep people in line, well, that's something else!

There was a lot going on in this book, from investigating her uncle, trying to find her parents, dealing with the cold fury to show people their greatest fears with your eyes, and the bit of romance, and what she did for the guy. It was just all so great to read!

Such a wonderful, magnificent book, loved it so much, and I can't wait for the sequel!