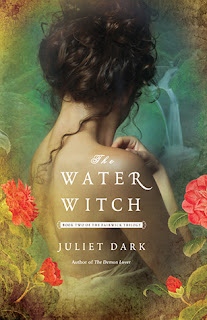 From Goodreads:
After casting out a dark spirit, Callie McFay, a professor of gothic literature, has at last restored a semblance of calm to her rambling Victorian house. But in the nearby thicket of the Honeysuckle Forest, and in the currents of the rushing Undine River, more trouble is stirring. . . .

The enchanted town of Fairwick's dazzling mix of mythical creatures has come under siege from the Grove: a sinister group of witches determined to banish the fey back to their ancestral land. With factions turning on one another, all are cruelly forced to take sides. Callie's grandmother, a prominent Grove member, demands her granddaughter's compliance, but half-witch/half-fey Callie can hardly betray her friends and colleagues at the college.

To stave off disaster, Callie enlists Duncan Laird, an alluring seductive academic who cultivates her vast magical potential, but to what end? Deeply conflicted, Callie struggles to save her beloved Fairwick, dangerously pushing her extraordinary powers to the limit—risking all, even the needs of her own passionate heart.

My Review:
This was such a fantastic sequel! I'm so glad that I got the chance to read it, because I loved the first book, and then yeah, I really loved this book, too! It was really fantastic to have this chance to dive into this world again!

What was really fantastic, was that we got to learn so much more about this world! Because of the fact of her half witch, half fey status, Callie can see both worlds, is a part of them. And there was so much more to learn about them, especially with this conflict!

What I really enjoyed about this book, was even though she was pretty out of it from what she had to do after the ending of the last book, that she got it together to help the people of the town, because the the big conflict that was going on!

Oh, boy, that ending! Because of everything that was going on, and the fact that it's not the last book of the series, but I think the middle of it, I was thinking that something along these lines was going to happen, though I didn't know exactly what. So that ending was just so perfect, loved reading it!

And I can't wait for the next, maybe last, book! I just want to read it!