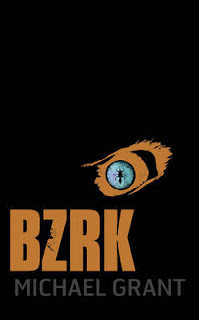 From Goodreads:
Love The Hunger Games?  Action-adventure thrillers with a dystopian twist? BZRK (Berserk) by Michael Grant, New York Times best-selling author of the GONE series, ramps up the action and suspense to a whole new level of excitement.

Set in the near future, BZRK is the story of a war for control of the human mind.  Charles and Benjamin Armstrong, conjoined twins and owners of the Armstrong Fancy Gifts Corporation, have a goal:  to turn the world into their vision of utopia.  No wars, no conflict, no hunger.  And no free will.  Opposing them is a guerrilla group of teens, code name BZRK, who are fighting to protect the right to be messed up, to be human.  This is no ordinary war, though. Weapons are deployed on the nano-level. The battleground is the human brain.  And there are no stalemates here:  It's victory . . . or madness.

BZRK unfolds with hurricane force around core themes of conspiracy and mystery, insanity and changing realities, engagement and empowerment, and the larger impact of personal choice. Which side would you choose?  How far would you go to win?

My Review:
I didn't enjoy this series as much as the Gone series, but this was a pretty interesting and entertaining book! And really creepy, to have those microscopic machines that could be controlled by a human, machines capable of getting inside of your body...and those are the good guys!

We got a multitude of POV's in this book, mainly from the two new recruits to BZRK, but then a few others, like from Charles and Benjamin, which was just a really weird part of the book! But it was great to see so much of the world!

So I really enjoyed the test that the guy had to go through, multitasking, playing two separate games at one time, to test to see if he could do it. And it's a bit scary that he can, because again, machines, well, controlling them, and then what your body is doing...yeah.

That ending! Where they could've won the game, the battle, but they decided to spare the twins, because it would be pretty cruel to kill them in cold blood. Bet that's going to come back and haunt them! But they did make the right decision!

I did enjoy this book, it was just a different kind of book!

Author: Michael Grant
Series: BZRK #1
Read: January 25th, 2013
Source: Library
Reason Why: I enjoy the Gone series, so I had to check it out, and it's a 2013 Dystopia Book!
Publisher: EgmontUSA
Published: January 1st 2012