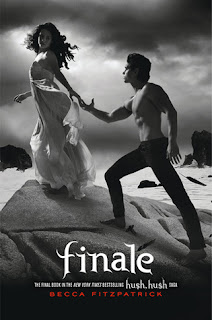 From Goodreads:
Will love conquer all?

Nora and Patch thought their troubles were behind them. Hank is gone and they should be able to put his ugly vendetta to rest. But in Hank's absence, Nora has become the unwitting head of the Nephilim and must finish what Hank began. Which ultimately means destroying the fallen angels - destroying Patch.

Nora will never let that happen, so she and Patch make a plan: lead everyone to believe they have broken up, and work the system from the inside. Nora will convince the Nephilim that they are making a mistake in fighting the fallen angels, and Patch will find out everything he can from the opposing side. They will end this war before it can even begin.

But the best-laid plans often go awry. Nora is put through the paces in her new role and finds herself drawn to an addictive power she never anticipated.

As the battle lines are drawn, Nora and Patch must confront the differences that have always been between them and either choose to ignore them or let them destroy the love they have always fought for.

My Review:
Oh, this was such a great ending to this series! I enjoyed reading it so much, it was just so good, and there were ups and downs, but in the end, it was an up, and that was just so perfect for the ending to read! Loved it!

Nora made the best choice she could, with limited options, and all of them pretty bad. It's not her fault that it didn't work out how she wanted. Because not everyone that's close to her agrees with her. Thankfully, said person was only recently introduced!

The war between the Nephilim and the Fallen Angels is the big thing in this book. It involves losses, which were hard to read, but there were some unexpected reveals, which were a big bonus! I just enjoyed reading this book!

That ending was just really great, and happy, but I have a few questions, because I want those little details. Like, are Nora and Patch still living in Clearwater? What are they doing with their lives? And so much more, I want more of the happy ending!

Really excellent book, and magnificent ending to the series, I enjoyed it so much!