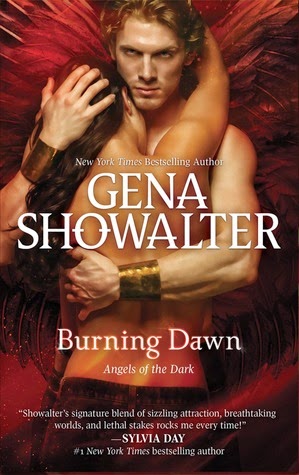 Burning Dawn by Gena Showalter
Expected Publication: April 29th, 2014
From Goodreads:
A tormented past has left Thane with an insatiable need for violence, making him the most dangerous assassin in the skies.
He lives by a single code: no mercy. And as he unleashes his fury on his most recent captor, he learns no battle could have prepared him for the slave he rescues from his enemy's clutches—a beauty who stokes the fires of his darkest desires.

Elin Vale has her own deep-rooted scars, and her attraction to the exquisite warrior who freed her challenges her every boundary.
But Thane's unwavering determination to protect her means she must face her greatest fears—and enter a world in which passion is power, and victory means breathtaking surrender. 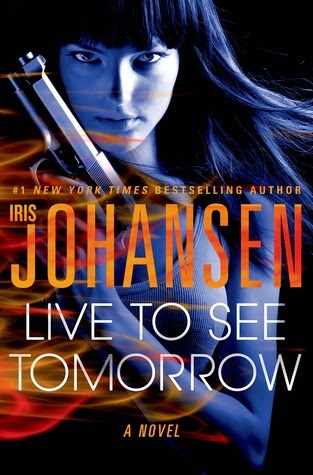 Live to See Tomorrow by Iris Johansen
Expected Publication: April 29th, 2014
From Goodreads:
Catherine Ling: raised on the streets of Hong Kong, she has been a shadowy CIA Operative since she was fourteen years old. Now, years later, Catherine is as lethal as she is beautiful. There are only a few things in life she cares for. One is her son. Kidnapped when he was only two, Catherine has only recently been reunited with him and the vow of her heart is never to let him face danger again. The other is her mentor, Hu Chang. Mysterious, brilliant, and deadly, Hu Chang taught Catherine everything she knows and she is loyal to him. Now, Hu Chang is calling Catherine to a new task: rescue an imprisoned journalist in Tibet—a woman who has been subjected to unspeakable horrors. Her connection to Hu Chang is unknown. What's also unknown is that Catherine will be going up against a man so evil, his crimes have stretched back into this area for forty years. Is Catherine being used as a pawn by Hu Chang? Can she save a woman she's never even met? And will either of them live to see tomorrow? 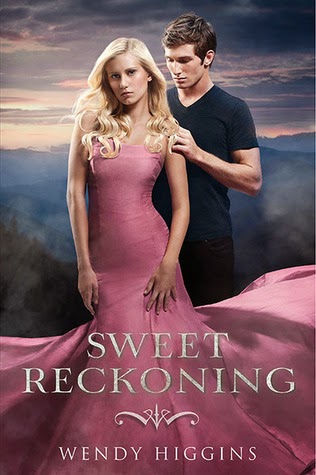 Evil is running rampant and sweet Anna Whitt is its target. Nobody knows when or how the Dukes will strike, but Anna and her Nephilim allies will do anything necessary to rid the earth of the demons and their oppressive ways.

The stakes are higher than ever, and Anna is determined that the love she feels will be her strength, not a liability. But trying to protect the ones she loves while running for her life and battling demonic forces proves to be perilous—especially as faces are changing and trust is fleeting. When the Duke of Lust sends Anna’s great love, Kaidan Rowe, to work against her, Anna must decide how much she’s prepared to risk.

In the most sensual and fast-paced installment yet, Sweet Reckoning brings all the beloved Neph together one last time to fight for their freedom. 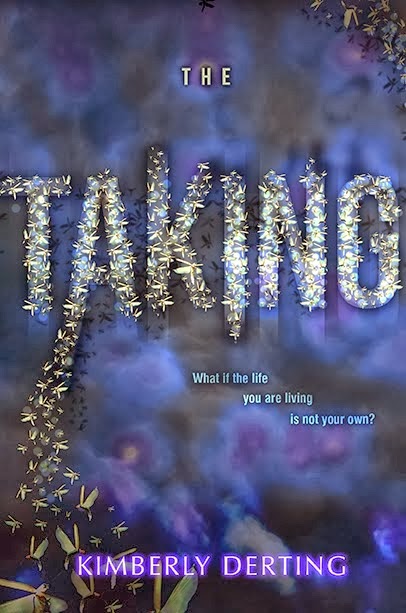 The Taking by Kimberly Derting
Expected Publication: April 29th, 2014
From Goodreads:
A flash of white light . . . and then . . . nothing.

When sixteen-year-old Kyra Agnew wakes up behind a Dumpster at the Gas ’n’ Sip, she has no memory of how she got there. With a terrible headache and a major case of déjà vu, she heads home only to discover that five years have passed . . . yet she hasn’t aged a day.

Everything else about Kyra’s old life is different. Her parents are divorced, her boyfriend, Austin, is in college and dating her best friend, and her dad has changed from an uptight neat-freak to a drunken conspiracy theorist who blames her five-year disappearance on little green men.

Confused and lost, Kyra isn’t sure how to move forward unless she uncovers the truth. With Austin gone, she turns to Tyler, Austin’s annoying kid brother, who is now seventeen and who she has a sudden undeniable attraction to. As Tyler and Kyra retrace her steps from the fateful night of her disappearance, they discover strange phenomena that no one can explain, and they begin to wonder if Kyra’s father is not as crazy as he seems. There are others like her who have been taken . . . and returned. Kyra races to find an explanation and reclaim the life she once had, but what if the life she wants back is not her own? 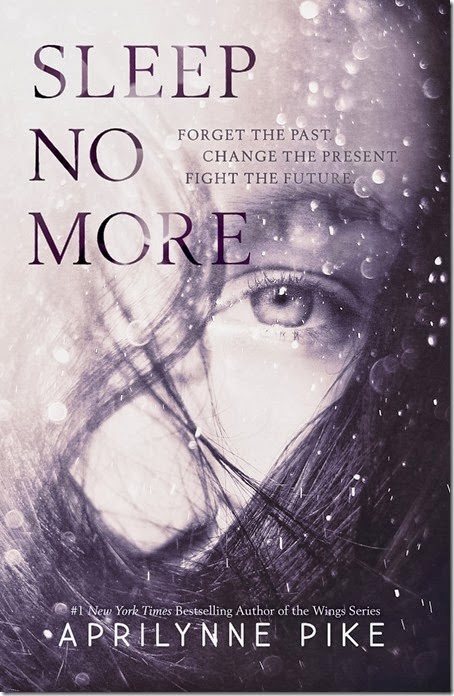 Oracles see the future but are never supposed to interfere. Charlotte learned that the hard way. If she hadn't tried to change one of her childhood visions, her father would still be alive. Since the accident, Charlotte has suppressed her visions to avoid making the same mistake. But when she receives a premonition of a classmate's murder, she can no longer ignore her powerful gift.

Then Charlotte meets someone who not only knows her secret but who also has a way for her to stop the killer. He offers to teach her how to manipulate her visions to change the future. But doing so will put Charlotte in the path of the murderer.…

Aprilynne Pike's bestselling Wings series was called "remarkable" by Stephenie Meyer, bestselling author of the Twilight Saga. And her most recent novel, Life After Theft, was cheered as a "whirlwind adventure" by School Library Journal. Now Aprilynne returns with this exhilarating departure from her previous novels. Sleep No More is a psychological thrill ride that is sure to keep readers' hearts racing until the very end. 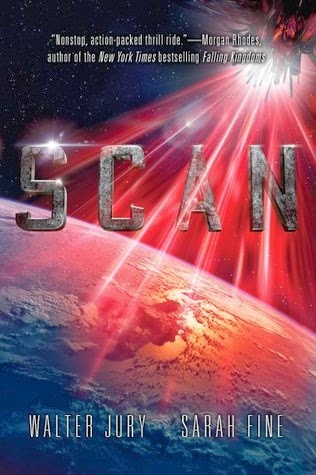 Scan by Sara Fine and Walter Jury
Expected Publication: May 1st, 2014
From Goodreads:
Tate and his father don’t exactly get along. As Tate sees it, his father has unreasonably high expectations for Tate to be the best—at everything. Tate finally learns what he’s being prepared for when he steals one of his dad’s odd tech inventions and mercenaries ambush the school, killing his father in the process and sending Tate on the run from aliens who look just like humans.

All Tate knows--like how to make weapons out of oranges and lighter fluid--may not be enough to save him as he’s plunged into a secret inter-species conflict that’s been going on for centuries. Aided only by his girlfriend and his estranged mother, with powerful enemies closing in on all sides, Tate races to puzzle out the secret behind his father’s invention and why so many are willing to kill for it. A riveting, fast-paced adventure, Scan is a clever alien thriller with muscle and heart. 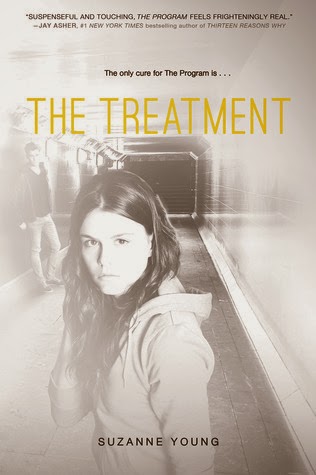 The Treatment by Suzanne Young
Expected Publication: April 29th, 2014
From Goodreads:
How do you stop an epidemic?

Sloane and James are on the run after barely surviving the suicide epidemic and The Program. But they’re not out of danger. Huge pieces of their memories are still missing, and although Sloane and James have found their way back to each other, The Program isn’t ready to let them go.

Escaping with a group of troubled rebels, Sloane and James will have to figure out who they can trust, and how to take down The Program. But for as far as they’ve come, there’s still a lot Sloane and James can’t remember. The key to unlocking their past lies with the Treatment—a pill that can bring back forgotten memories, but at a high cost. And there’s only one dose.

Ultimately when the stakes are at their highest, can Sloane and James survive the many lies and secrets surrounding them, or will The Program claim them in the end?

Oh, 6 great, great books! And I can't wait to read all of them, waiting to read Sweet Reckoning which I got from Edelweiss for rereading the whole series, but yeah, can't wait! What about you guys? Happy reading!
Posted by Louisa @ Words I Write Crazy at 6:00 AM