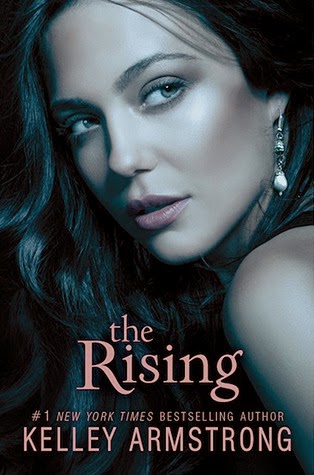 From Goodreads:
Things are getting desperate for Maya and her friends. Hunted by the powerful St. Clouds and now a rival Cabal as well, they're quickly running out of places to hide. And with the whole world thinking they died in a helicopter crash, it's not like they can just go to the authorities for help.

All they have is the name and number of someone who might be able to give them a few answers. Answers to why they're so valuable, and why their supernatural powers are getting more and more out of control.

But Maya is unprepared for the truths that await her. And now, like it or not, she'll have to face down some demons from her past if she ever hopes to move on with her life. Because Maya can't keep running forever.

My first review of The Rising
My Review:
What a great ending to the series! I kinda wish that there'd be a 3rd trilogy, on the 3rd group, and that could link to these 2 in the end like this book did, and have all of them come together or not. Because I want more of this world, beyond the Chloe and Derek novella that we're going to get over the course of May. Because I love all these characters, and their world, it's just fantastic, if super dangerous!!!

I love Maya as a character, she's so smart, and realistic, and a realist. If that's how you spell it, because I obviously don't know, spell check!! Then there's Daniel, the steady leader partner with Maya, and we learn some more of their romantic history, the non-existent one,  of the coin toss that Maya let Serena win, because she was in that awkward phase of liking her best boy friend like that, but not really recognizing it.

We totally learn more about her dad, and some others, and Corey really comes into,  his powers, which was pretty darn awesome. And we get to meet her twin brother, Ash!! And his story, it really makes me hate their mom, just a bit, abandoning one child because it'd be easier to hide if they were split up, so she abandoned the baby that in looks, was more recognizably Native American, ie, Maya, kept Ash, only to leave him with some friends when he was 5. So yeah, life wasn't too easy on him.

We also meet up with the gang of the previous trilogy, which was pretty darned awesome, I really enjoyed that, all the interactions, how they might be similar, and all that. And we also get to meet Sean, Savannah's older half brother.

Yeah, this was an awesome book, it ended so great, loved that her and Daniel were going to start dating, and yeah, it wrapped up a lot of loose threads, with the possibility of more stories later down the line in full length novels, which I hope for!!!