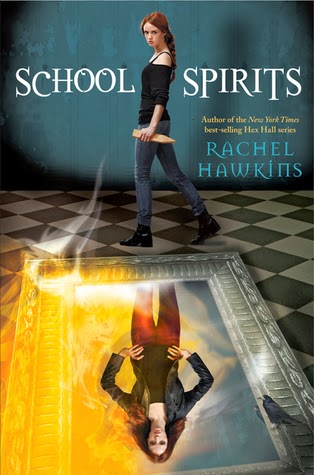 From Goodreads:
Fifteen-year-old Izzy Brannick was trained to fight monsters. For centuries, her family has hunted magical creatures. But when Izzy’s older sister vanishes without a trace while on a job, Izzy's mom decides they need to take a break.

Izzy and her mom move to a new town, but they soon discover it’s not as normal as it appears. A series of hauntings has been plaguing the local high school, and Izzy is determined to prove her worth and investigate. But assuming the guise of an average teenager is easier said than done. For a tough girl who's always been on her own, it’s strange to suddenly make friends and maybe even have a crush.

Can Izzy trust her new friends to help find the secret behind the hauntings before more people get hurt?

My Review:
I really enjoyed this book! It was funny, and it had so many snarky comments, pop culture references, and it was just overall hilarious! Like the scene in the gym, where they're playing dodgeball, and when her new friend got hit pretty badly, Izzy threw a ball at the guy, and it dislocated his shoulder. He so deserved it! And that's how she meet Dex, because she was sent to run laps after that incident.

I loved Dex. He was funny, and a bit of a crazy person, and a unique fashion style, of purple clothing, and yeah, he was nice to Izzy, and they had a fun "date" of food, after salting a grave. And yeah, they would be so cute together, and the got, like, one kiss in this book! I want them to have a HEA!!!

The ending was a bit sad, what with what Dex's grandmother did, but that the Brannick's, the mirror guy, and Dex are going to be a group, and fight bad Prodigums, and yeah, that was pretty exciting!

This had got to be a series. One, because her and Dex ending as friends in this book, when I know they can be so much more! Two, that they have to find Finn, her sister, because that's a pretty big hole in her and her mom's life, and yeah, it's something that has to have some time to work on!!! Three, because the mirror guy said that Izzy was going to release him, and I want to know whether or not that's going to happen!

This was such an amazing book, I really loved it, and yeah, I want a sequel!!