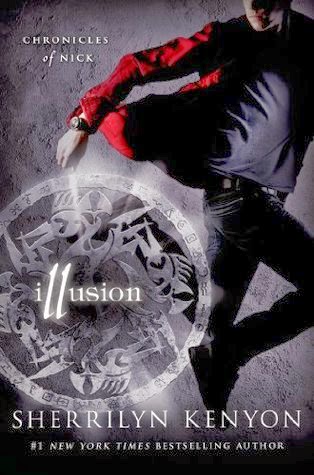 From Goodreads:
Be careful what you wish for…

Nick Gautier is tired of his destiny. He doesn't want to be the son of a demon who's fated to end the world. Nor does he want to see another demon or other preternatural creature who wants to kill or enslave him. He just wants to be normal and have normal problems like everyone else.

But normality isn't all it's cracked up to be. When he gets sucked into an alternate reality where his mother has married his mentor and his Atlantean god best friend has become a human geek, he begins to understand that no life is free of pain, and that every person has a specific place in the universe… Even the son of a hated demon.

Most of all, he sees that his powers aren't the curse he thought they were, and that the world needs a champion, especially one its enemies can't imagine rising up to defend the ones he should destroy.

Old enemies and new friends square off for a major battle that will either restore Nick to his real world, or end him forever.

My Review:
I loved this book!!! So good, we learn about Kody, which was so freaking awesome, both about what she is, her family (I was right!!!) and the group that she works for, which was freaking amazing!! We also see how Nick's life could've turned out if his dad hadn't existed (because he only existed in Nick's universe, because there can only be one)  and how he would've been like.

It was pretty cool for him to be the son of Bubba, and how his mom was the same person, but a whole different life besides Nick. Well, the Nick in the universe his soul was sent to. And then to see how the other characters were different, there was the Ash and Simi at the prom from the epilogue of Inferno, and the prologue of Illusion. We also meet Acheron as the Destoryer (though his mom wasn't out, I think she might've been killed, or something was different with the whole different universes thing) and Savitar with decreased powers. And the Devereaux sisters are almost the same-except that they aren't, which just makes me appreciate them as they are in the DH series even more!!!

We also learn a bit more about the Malachai, and in the new universe, a bit of how Thorn plays in (but he doesn't in Nick's universe) and there was a mention of Cadegan, who's the hero of the next DH book, Son of No One, so I wonder how much of the mention he got in this book from the other universe is going to be in the main, original one.

I can't wait to know more about Zev, and if he's the one that Nick shouldn't have embraced, or not, because Kody has a really good reason to want her life back-but it comes at the cost of Nick's life. Though you'd think the best way to keep Nick from becoming the bad evil that was at the prologue of Inferno would be to make his mom immortal, because it's her love that beats back the darkness.

Yeah, this was a spectacular book, and I can not wait for Defiance, because it's going to be freaking good!!