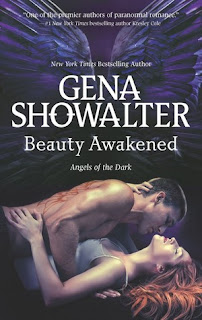 From Goodreads:
His name is Koldo. He is scarred, powerful, his control legendary-and he lives only for vengeance, determined to punish the angel who viciously removed his wings. But if he yields to the forces of hatred, he will be kicked from the heavens, eternally damned.

She is his last hope. Nicola Lane was born with a defective heart, yet this fragile human shows surprising strength as demons stalk her every move, determined to end her. She is the key to Koldo's deliverance...and his downfall. Though he fights duty, destiny and his first addictive taste of desire, his toughest battle will be the one for Nicola's life-even if he has to sacrifice his own...

My first review of Beauty Awakened
My Review:
Oh, my, I loved this book! Such a wonderful, amazing world, that we've had over 10 books to be in, but this one goes deeper into the Angels/Sent Ones side, that we've only seen either briefly, or it wasn't really the focus. But in this book, that side started to shine (and I hope it gets brighter in Burning Dawn!)

Koldo was an awesome character, he's been poorly treated, for all of his childhood, until he was rescued by the Sent Ones. And by poorly treated, I mean, his mom ripped off his wings and then sent him to live with his dad, and his dad, well, he's the major bad that they face in this book, so can you imagine what his childhood was like, being "raised" by him?

Nicola, she was so strong, born with a heart condition, and then to save her sister for a bit longer, and then she follows that deal, and heals herself by being positive, and driving out the poison of the demons, which was just fantastic!!! It was sad about her sister, but Laila, in Nicola's glimpse of her, seemed happier in Heaven.

This was such an amazing book, and there was a new character, a fallen sent one or angel, that had been harder to meet with then the leader, and then mysterious fell, and yeah, she helped, so I hope that we see her again, she was interesting!

Oh, and Bjorn goes missing, Thane starts to become a slave to a Phoenix, and yeah, lots of things happen in this book, like at the end, that the things that were taken to get to the River of Life were returned!!! So yeah, lots of great stuff, and some bad stuff, happened in this book!

I loved it, and I can't wait to read Burning Dawn!!!