Week 19 Review: A Court of Mist and Fury 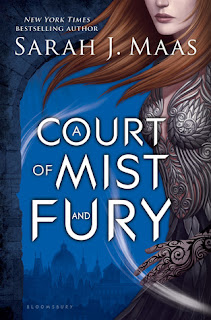 From Goodreads:
Feyre survived Amarantha's clutches to return to the Spring Court--but at a steep cost. Though she now has the powers of the High Fae, her heart remains human, and it can't forget the terrible deeds she performed to save Tamlin's people.

Nor has Feyre forgotten her bargain with Rhysand, High Lord of the feared Night Court. As Feyre navigates its dark web of politics, passion, and dazzling power, a greater evil looms--and she might be key to stopping it. But only if she can harness her harrowing gifts, heal her fractured soul, and decide how she wishes to shape her future--and the future of a world cleaved in two.

With more than a million copies sold of her beloved Throne of Glass series, Sarah J. Maas's masterful storytelling brings this second book in her seductive and action-packed series to new heights.

My Review:
Oh, this book! It was so fantastic and wonderful, and it was double the size of the first book,  around Queen of Shadow sizes, so yeah, that was a lot of book to read, which made me a very happy reader! Just loved this book so much!

Since this review is posting almost a week after this book came out, there will be spoilers. Like Tamlin shows his bad side, and Feyre slowly learns to look at the past, and see things a bit objectively-like the last day before the final challenge, and he wanted to be with her, not release her. Shows that she put more into the relationship then he did!

This is the book where we learned more about the Night Court. And things are more complicated then it seemed, because there was a whole city that was hidden, has been hidden for thousands of years. Oh, and another court, the one that Rhys takes an active hand in running, the Court of Dreams!

And the new characters! I loved meeting the, Mor, Rhy's cousin, who'd been through a hell of time when she was younger, Cassian and Azriel, Illyarian's, and Amren, one of the most terrifying characters in this world!

Speaking of, I loved being in this world! We learned so much, and there were so many things that we and Feyre learned-like the Spring court is the only one that has Tithes. And the prison that Amren was in, and escaped from. Yeah, lots of interesting details!

Feyre has a hard journey in this book! She's damaged from what happened Under the Mountain, what she did and now that she's an immortal with a mortal heart, that led to some hard times for her to work through her issues. But Tamlin didn't help. He made things worse, by coddling her, by basically making her his pet, even though she'd proved her strength. And he did some other pretty awful things-like the fact that his family killed Rhys' mother and sister, and that's why Rhys and his father killed Tamlin's family. Yeah, forgot to mention that, didn't you, Tamlin!

There were also some really great moments, where Feyre learned her strength, and those were really incredible to read, like when she beat the Weaver, and got what turned out to be her future wedding ring! So great! And that she made friends with the other people in Rhys' inner court, that was so perfect! Oh, and the fact that Rhys is her true mate, and that he'd known since Under the Mountain, which explains some things!

That ending was pure evil! They came so close to their purpose, only to be captured,and then things went from bad to worse with betrayal after betrayal, and the King thinking that he could break the mating bond, something that was sacred. And Tamlin aliening himself with the King, and allowing his land to be an entry to Prythian, to get Feyre back and Rhys head, and totally disregarding Feyre's wishes and the mating bond. Yeah. Awful! And her sisters! But that she is going to be a spy to destroy their enemies from within, that was just incredible! I can't wait to see how it's going to play out!

Yeah, can you tell I loved this book! I just can't wait for the 3rd and final book, I know it's going to be superb!