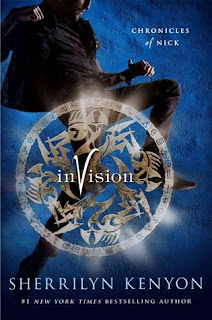 Think there's a lot of pressure on your shoulders? Nick Gautier was born to bring about the end of the world . . . it’s not easy being the heir of a demon overlord.

But Nick is determined to thwart his destiny and get into a good college. To be more than his genetics and prophecy foretell. No one is ever going to tell this stubborn Cajun who and what he really is. Or how to live his life.

Not even the Fates of the Universe. But now that he and his team of ancient gods and demons have claimed the Eye of Ananke, and he sees the missteps of the future, he has to battle the demons within that are far deadlier and more treacherous than any he's battled before. All the while his arch nemesis is back and determined to reclaim his place as the harbinger for Armageddon. Even if it means killing Nick and barbecuing everyone he loves to do so.

My Review:
I loved reading this book so much, and it was so great to read it so soon after A Court of Mist and Fury, because that review is about as long as this one is! One thing that really gets to me, is that this book mostly takes place over the course of a day. One day. Yeah, shows how hectic Nick's life can be!

There was a lot to learn in this book. A big thing was pith points, of events in people's lives that always happen-birth and death, and if you're special, a few others in-between. Though they can be changed, like a 0.01% chance, but they can. It just would cost!

Things were revealed in this book, that I don't remember if they were earlier. Like Jaden is Caleb and Xev's dad. And that when good guys were done the way, they said everybody had to die. And the leader guy was poisoned, he killed his wife and unborn son, and turned into the first Malachai. While she became the shade of Bathymaas. And when Bathymaas is reunited with her heart-Styxx and Bethany, then the guy's wife was reborn in Kody. Which is why she can tame the beast-her death was why he was so angry! Loved learning these things, though this world is so freaking complicated!

I'm pretty sure a previous book mentioned that Madoc is Nick's brother. Pretty sure. But mentioning it just in case it hasn't been before, and so that I can remember when it comes time to read the next book, which I already can't wait for! But there were also new things mentioned, like he's a Kallitechnis, which means he can go through anyone's dreams, and even time travel through them. So yeah, he shouldn't be getting the Malachai powers!

And then there's the mind boggling idea that Xev's son is Jared, the last of the one side of that war that left only one person left. The other being the Malacahi, and Nick is his grandson and the Malacahi. That is a whole pile of confusing! But then it kinda makes sense, the whole prophecy, light and dark thing.

Another part of that is why Jaden interacted with Jared like he did. Because they are grandfather and grandson, even if Jaden was the only one who might have known it, since Jared was raised as another man's child. Yeah. Complicated stuff!

Another big mind blowing little mention is that Apollymi is Jared's sister. Which means that Acheron and Nick are related. That Styxx and Nick are related. That Kody and Nick, no matter far apart, are slightly, related. Which is a mind blowing thing! Or maybe not, sister might just mean that they were born out of the chaos of the world starting...Because Noir and Azure are also his siblings...Oh, and that Noir's name is actual Kadar!

That Jaden has this being, Verlyn, that is a part of him, that is just pure primal source powers. Which are powerful, and just don't care about anything, but can do so many incredible things. Too bad that they don't care! And that Verlyn is supposed to be the first, the oldest, primal god. Yeah. And that Caleb and Xev probably don't know.

More complicated family things are that Noir's daughter is Laguerre, War, and since she's Cyprien's mother, yeah, that could be why Cyprien could drain both Nick and Noir. Which makes thing all the more complicated, and Sherrilyn Kenyon's mind must so complex to hold all these details from this series and all her others! Gah!

We also got to meet some new characters, like Kaziel and Vawn, who are friends of Aeron. And apparently you're not to give them liquor, because they can be very destructive without it, and it would be even worse with it!

I really enjoyed the future that Nick and Xev went to, with Ambrose not being the one who was killing everyone, but his son, Cyprien. And as the ending went, we know who his mother is, and it isn't pretty! Oh, and that Cyprien pretended to be Ambrose so he could tell Nick about the Eye, all in a plan to take him down! Gah! But that'd be why he could leave Nick's prints at the crime scene...

But they got Zavid back, which is really awesome, Jared reconnected with his sons, and some things were figured out, more were put into motion, there was just a lot packed into this book that just made for a fantastic read! Like going after The Cup of Hebe for Zavid so he can have his body back. And dealing with the dead boys who attacked Nick at the beginning of the series, and are now dead, with Nick's prints on the weapon. Yeah. Complicated! There wasn't any big showdown in this book like in the previous book, but things are brewing, and I can't wait to see how they'll play out!

Such a great, fantastic, wonderful and intense book! I can't wait for more!