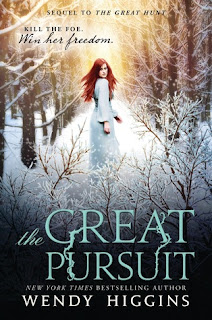 From Goodreads:
In The Great Pursuit, the dramatic sequel to the New York Times bestselling The Great Hunt, Wendy Higgins delivers another thrilling fantasy filled with dangerous enemies, political intrigue, searing romance, and a princess who is willing to do everything to protect her kingdom.

One hunt has ended, but the pursuit for love and justice continues.

The kingdom of Lochlanach has traded the great beast that once terrorized the realm of Eurona for something far more dangerous: the ire of powerful Lashed woman Rosaria Rocato. Rosaria demands that Eurona overturn the laws prohibiting magic, or an innocent will be killed each day.

Despite the king's resistance, Princess Aerity believes they must make peace with the Lashed, and though she's accepted a betrothal to the man who took down the beast, she cannot help thinking about Paxton, the Lashed man who stole her heart and disappeared.

Aerity soon discovers that Paxton has joined Rosaria's army in the war against her family. Though her feelings for him are still strong, her duty to her kingdom and her family is stronger—especially when her parents are kidnapped and she has to step up to the throne and once again put aside what's best for her in order to do what's best for her people. Paxton and Princess Aerity must fight to see what is more powerful: their love or the impending war between the magical Lashed and the non-magic humans.

My Review:
This book was really fantastic! I enjoyed being with these characters again, even though they're split up across the continent in this book! And a good part of this book, was getting everybody together again! Aerity and Paxton's reunion was amazing and totally unexpected!

It's kinda funny. It took one book to face one beast. Then it takes like, one chapter to face another. Because they've learned from the first time. And that leaves room for the bad guy behind it all. Well, there were two of them. Anyways.

It was kinda like they were treating the symptoms, not the disease. Because no matter how many creatures that they killed, well, more could be created. But also, there was the why people treated and viewed the Lashed. Because that wasn't cool or good at all!

Some bad guys, they really deserve to go down! Like, they either know they're bad and they like it it, or they're the type that thinks what they're doing is just, the right thing to do and are so annoying and overbearing. This guy, was the former. And I was so glad that they took him down, and how everything worked out! There was a battle, there was losses, but a victory for the good guys!

This book was fantastic, and I enjoyed reading it so much!