Week 9 Review: The Cost of All Things 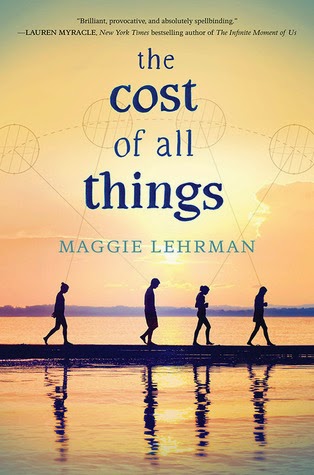 From Goodreads:
Eternal Sunshine of the Spotless Mind meets We Were Liars in this thought-provoking and brilliantly written debut that is part love story, part mystery, part high-stakes drama.

What would you pay to cure your heartbreak? Banish your sadness? Transform your looks? The right spell can fix anything…. When Ari's boyfriend Win dies, she gets a spell to erase all memory of him. But spells come at a cost, and this one sets off a chain of events that reveal the hidden—and sometimes dangerous—connections between Ari, her friends, and the boyfriend she can no longer remember.

Told from four different points of view, this original and affecting novel weaves past and present in a suspenseful narrative that unveils the truth behind a terrible tragedy.

My Review:
I really enjoyed reading this book! It was strange and different, what with the spells, and how this world worked. There was also the mystery that unfolded as we got these 4 perspectives, and yeah, I just wanted to know what was going to happen!

I enjoyed having these different perspectives. They all added something different to the story. These were different people, and while they were friends, they had secrets, that affected some or all of the others, and I loved connecting all the dots!

It was said that there was a side effect to the spells, and if you had more than one, the side effects would be compounded. Which was something of an issue in this book, because Ari had one back in Boston, and she just got another. But it was more complicated than that!

I just really wanted to know what was going on! I knew something was up, and we were getting clues, but I wasn't sure what. And when things came together, that was a great moment to read! Things made sense! Loved it!

This was a strange and wonderful book and just so great!

Author: Maggie Lehrman
Read: March 1st, 2017
Source: Edelweiss
Reason Why: Another Edelweiss book, and it's a DAC Book and a SAC 2016 Book and a WoW Book!
Publisher: Balzer + Bray
Published: May 12th 2015