Week 12 Review: The Word for Yes 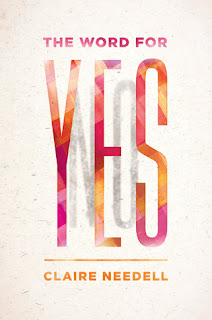 From Goodreads:
After their parents' divorce, Jan, Erika, and Melanie have to get used to the new world order: a father who's moved to another continent and a mother who throws herself into moving on. Jan, off at her first semester of college, has plenty to worry about, including an outspoken roommate who's kind of "out there" and an increasingly depressed and troubled long-distance boyfriend. Her younger sisters, left at home in New York City, and dealing with all the pressures of life in high school, aren't exactly close. Erika is serious and feels awkward and uncomfortable in crowds, though her beauty tends to attract attention. Melanie is socially savvy and just wants to go out—to concerts, to parties, wherever—with her friends. The gap between all three girls widens as each day passes.

Then, at a party full of blurred lines and blurred memories, everything changes. Starting that night, where there should be words, there is only angry, scared silence.

And in the aftermath, Jan, Erika, and Melanie will have to work hard to reconnect and help one another heal.

At once touching and raw, Claire Needell's first novel is an honest look at the love and conflicts among sisters and friends, and how these relationships can hold us together—and tear us apart.

This book is about this family, these sisters, and their lives after their dad permanently leaves the family to write his book in Japan. It also shows how they deal with the rape, which was just before the book's halfway point.

I enjoyed getting to know these girls, the oldest, just going off to college, and all the changes there. The middle child who's gorgeous, but socially naive, and has a difficult relationship with the youngest sisters. The youngest sister, who is basically angry all the time, and was hard to like. I felt for her for what happened, but I still didn't really like her. She didn't deserve what happened!

My main issue with this book, is the ending. In real life, yeah, things work out like that, but this is a book, and I would like a little bit more closure. It didn't feel like things were finished, besides the book itself.

I enjoyed this book, I just wish that we had just a bit more of an ending!