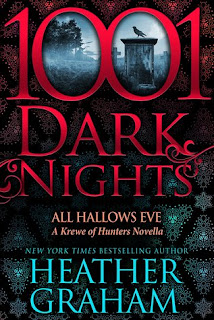 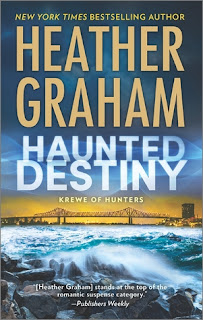 From Goodreads:
Salem was a place near and dear to Jenna Duffy and Samuel Hall—it was where they'd met on a strange and and sinister case.

They never dreamed that they'd be called back. That history could repeat itself in a most macabre and terrifying fashion.

But, then again, it was Salem at Halloween. Seasoned Krewe members, they still find themselves facing the unspeakable horrors in a desperate race to save each other—and perhaps even their very souls.

From Goodreads:
Between the evil and the deep blue sea…

A historic cruise ship, a haunted ship, the Celtic American Line's Destiny, sets sail from the Port of New Orleans—with a killer on board. He's known as the Archangel Killer because of the way he displays his victims in churches. And how he places a different saint's medallion on each body. No one knows exactly who he is or why he's doing this.

Jackson Crow—head of the FBI's Krewe of Hunters, a special unit of paranormal investigators—is assigned to the case, along with local agent Jude McCoy. Then Alexi Cromwell, who works in the ship's piano bar, is drawn into the situation when a victim's ghost appears to her—and to Jude. She and Jude share an attraction, and not just because of their mutual talent.

There are many suspects, but one by one they're ruled out… Or are they? In the end, Jude and Alexi have to rely on each other to catch the killer and escape his evil plans for Alexi.

My Review:
I loved reading these books! They were of course, fantastic, and also, near the end of what's been currently been published. And since I've been behind for years, well, yeah, catching up is cause for celebration for me!

All Hallows Eve was fantastic, in that we got to see Jenna and Sam back in Salem, where they began! Things were a bit of a mess, given the case, but yeah, it was so great to see these two again! A really fantastic story!

Haunted Destiny, for me, is the start of a mini trilogy with the name of the boat that's important to the story, is in the title. And there's some pretty great characters! Looking ahead, I know that a few from this book, are in the next one! So yeah, that's pretty cool!

The bad guy has a thing against working women, who has a classical idea that women belong in the home. Which of course is outrageous and awful! And that he was killing women over this, because they rejected him and offered work as a reason...yeah. He was pretty darned awful! I'm glad that they took him down!

These books were really fantastic, and I can't wait to read more!