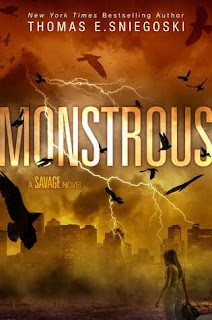 From Goodreads:
Sidney and her friends might have survived the storm that came to the small island of Benediction, but now the storm has reached Boston, and the city isn't prepared for what's coming in this sequel to the "unpredictable" (VOYA) and "fast-paced" (School Library Journal) Savage from New York Times bestselling author Thomas E. Sniegoski.

The horrors that began in Savage continue in Boston as Sydney and her friends work to protect the city from the newly crazed rampage of animals and try to figure out the origin of the storm and its power.

After the first book, we know a bit about this world. There are things that are still a mystery, and the threat was larger, because hey, a mainland city is bigger than an island town. A lot more people, and while the people aren't contained, yeah. Still, big threat!

Being with these characters again was really great! But of course, they go put themselves in danger. Of course. Plus, we got to get to know some characters that we didn't really before, those two scientists from the beginning of the first book. Plus there were some new characters to get to know, who were really important to the story, who I enjoyed getting to know!

That ending was just killer! With that killer twist-revelation about the attacks, yeah, that just made this book! I don't know if there'll be a 3rd book, but I would totally love that! More time with these characters, and more threats...yeah, that'd be awesome!

Yeah, this book was so fantastic, and I absolutely loved reading it!