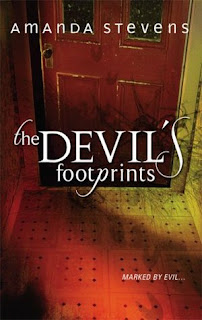 From Goodreads:
The footprints were etched in the snow for miles, passing through walls and crossing rivers...appearing on the other side as though no barrier could stop them. In 1922 a farmer in Adamant, Arkansas, awakes to a noise on his roof and finds his snow-blanketed yard marked with thousands of cloven footprints. The prints vanish with the melting snow...only to reappear seventy years later near the gruesome killing of Rachel DeLaune.

Years after her sister's unsolved murder, New Orleans tattoo artist Sarah DeLaune is haunted by the mysteries of her past. Sarah has always believed that her sister was killed by a man named Ashe Cain. But no one else had ever seen Ashe. He had "appeared" to Sarah when she needed a friend the most, only to vanish on the night of her sister's murder. The past bleeds into the present when two mutilated bodies are found near Sarah's home, the crime scene desecrated by cloven footprints.

My Review:
I really enjoyed rereading this book! I kinda remembered what happened, but I wasn't sure how it all worked out, so it was really great to read this book again! It was just so enjoyable, and I'm glad that I did! Just a fantastic read!

The whole premise of the book, the title, the synopsis, the Devil's Footprints, is totally creepy. And with the murders, that just added to the creepy atmosphere, which I delighted in reading! Besides the fact that all the books that I've read written by Amanda Stevens has that atmosphere!

Sarah has had it rough. Her sister was the one her dad liked more, and he was really harsh with Sarah. And when Sarah died...yeah, things got worse. He blamed her, and she kinda blamed herself because of her friend Ashe. And then to have the current murders come up, and it was like they were speaking to her, the tattoos and such, that wasn't good for her!

I really enjoyed the whole process to finding out who the bad guy was! It wasn't as easy as "this guy is the bad guy" because he ad multiple identities, and that confused the matter, but when things were figured out, that was tense, but such a great ending!

I really enjoyed this book, and I need to read more of her books!