Week 22 Review: Songs About a Girl 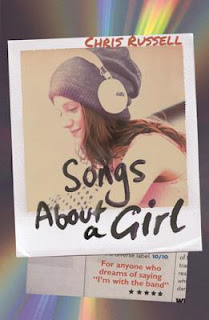 From Goodreads:
Fifteen-year-old Charlie Bloom receives the invitation of her dreams to take backstage photos for chart-topping boyband Fire & Lights. As she is launched into a world of bloggers and paparazzi, she becomes caught between the dark charms of the band's star member, Gabriel West, and his squeaky clean bandmate Olly Samson. At school, Charlie's growing notoriety makes her a target for bullies and as her connection with Gabriel deepens, she discovers that all of his songs are mysteriously about her.

A modern love story about heartbreak and the power of teenage obsession, SONGS ABOUT A GIRL combines the raw intensity of Twilight with the electrifying pop universe of One Direction. Told with Charlie’s trademark frankness and humour, this tale of teenage obsession and desire will appeal to readers of Zoella, Rainbow Rowell and Holly Smale.

My Review:
This book was a lot of fun to read! I mean, I really enjoy music and singing, and the idea that this book was written to fill the void that One Direction separating for now, well, yeah, that's a really sweet and awesome backstory!

I kinda don't really get being super fans of bands. I mean, like I said, I enjoy music. But I don't get obsessing over the people who create it-and really, not creating all of it, they don't always write the lyrics, or the producer, who brings all the recorded music together. Those people don't get the fame. So yeah, I just don't really get it. Because all bands have them, and it was a part of why she was being bullied. Just, gah.

To be torn between two different guys, and in different ways, is tough, especially when faced with the opportunity to take the pictures, like she's been given. And to have it all in the semi-public eye, that just makes it even worse!

That ending was just killer! This is the start of the series, so yeah, there's room for it to move on from this, not that the ending was bad, it was just that it was bad for the characters! Sure, there's some good parts, but there's also this need for healing to happen. And I can't wait!

I enjoyed this book, and I can't wait to read more of this series, and see where it will go!