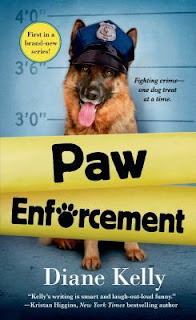 From Goodreads:
Paw Enforcement introduces police officer Megan Luz and her loyal K-9 partner Brigit-two Fort Worth cops who are worth their weight in kibble.

SHE'S ON A SHORT LEASH.
Officer Luz is lucky she still has a job after tasering a male colleague where it counts the most. Sure, he had it coming-which is why the police chief is giving Megan a second chance. The catch? Her new partner can't carry a gun, can't drive a cruiser, and can't recite the Miranda Rights. Because her new partner is a big furry police dog. So that's what the chief meant when he called Megan's partner a real b*tch...

WILL FATE THROW HER A BONE?
With Brigit out on the beat, Megan is writing up enough tickets to wallpaper the whole station. But when a bomb goes off at the mall's food court, it's up to Megan and Brigit to start digging-and sniffing-for clues. With the help of dead-sexy bomb-squad expert Seth Rutledge and his own canine partner named Blast, Megan finds herself in a desperate race to collar a killer. Will justice be served-or will she end up in the doghouse?

My Review:
Oh, man, this book was so awesome to read! It was so hilarious, from everything from Megan's thoughts, to the way things were described, just everything, was junny in this book and I just loved to read it!

I think one of my most favourite parts in this book, was the way that it was told-we got a chapter from Megan, then one from Brigit, and then one from the bad guy. I've glimpsed at the next book int he series and it continues this, so yeah, I'm really happy with that!

The mystery was a great read, because on one hand, we had Megan and Bridget investigation once the first bomb happens and Brigit is the one who discovers it. And then we saw from the bad guy's view, and knew what was coming, and the clues that could've helped Megan solve the case! They didn't need them, they caught the bad guy, but they could've caught him sooner, and I know they would've prefered that!

The ending was just perfect! They caught the bad guy, and Megan got the one guy's huge car plastic balls. That was just fantastic and awesome! And hilarious, and it was just the perfect ending to this book, just loved it!

This book was absolutely amazing, and I can't wait to read more of this series!