Week 22 Reviews: The Caretaker, The Cage 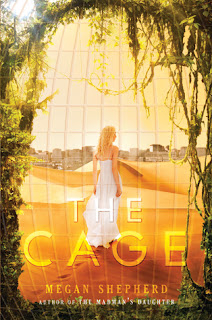 From Goodreads:
All the books in THE CAGE series are told from a variety of perspectives: Cora, our main protagonist, but also from Lucky, Leon, Mali, Nok, and Rolf. Through all of this, I always felt as though one perspective was missing: Cassian's. Because he belongs to a non-human, super-intelligent race, his motives are often mysterious and difficult to interpret.

We are left wondering if he is their abductor, their savior, or something else entirely. While I love this sense of mystery regarding Cassian, I also wanted to dive deeper into his character and include some "behind the scenes" sections showing what he was up to while Cora and her friends were trying to navigate the Cage's dangerous puzzles. In THE CAGE, we learn what it is about Cassian that enchants Cora, and now we get to see what it is about Cora–from the first moment he saw her on Earth–that draws Cassian to her, too. Enjoy!

From Goodreads:
The Maze Runner meets Scott Westerfeld in this gripping new series about teens held captive in a human zoo by an otherworldly race. From Megan Shepherd, the acclaimed author of The Madman's Daughter trilogy.

When Cora Mason wakes in a desert, she doesn't know where she is or who put her there. As she explores, she finds an impossible mix of environments—tundra next to desert, farm next to jungle, and a strangely empty town cobbled together from different cultures—all watched over by eerie black windows. And she isn't alone.

Four other teenagers have also been taken: a beautiful model, a tattooed smuggler, a secretive genius, and an army brat who seems to know too much about Cora's past. None of them have a clue as to what happened, and all of them have secrets. As the unlikely group struggles for leadership, they slowly start to trust each other. But when their mysterious jailer—a handsome young guard called Cassian—appears, they realize that their captivity is more terrifying than they could ever imagine: Their captors aren't from Earth. And they have taken the five teenagers for an otherworldly zoo—where the exhibits are humans.

As a forbidden attraction develops between Cora and Cassian, she realizes that her best chance of escape might be in the arms of her own jailer—though that would mean leaving the others behind. Can Cora manage to save herself and her companions? And if so . . . what world lies beyond the walls of their cage?

My Review:
I really enjoyed reading these stories! I did read them together, because while The Caretaker starts before The Cage, it does time jump a few times, and about 2/3rds take place alongside The Cage, so I read them like that. Which was so great, seeing her thoughts, and then his thoughts! Tricky, tricky!

Honestly, the thought of humanity being a lower species, not intelligent, because we don't have psychic powers, well, is insulting. And infuriating. It's like, what gives you the right to decide what makes up intelligence? Gah! And the test to prove a race is worthy to set up in intelligence is called The Gauntlet? Yeah, not cool!

I really enjoyed getting to know these people. We mostly had Cora's POV, but we had a few of the others, learning their secrets, and yeah, I really enjoyed that! Adding in The Caretaker, we saw a lot of the world, but at the same time, it's only a sliver!

That ending was just pure evil! To break her, betray her, to awaken her psychic abilities, is pretty horrendous. But his motives were good, so the future books will tell if Cora forgives him or not. I can't wait to read and see what happens next!

I absolutely loved reading these two books, and I can't wait to read the rest of the series!