Week 14 Reviews: Shadow Me, Defy Me 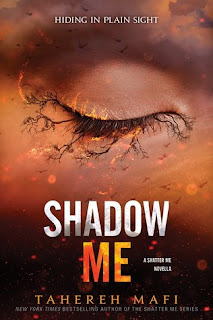 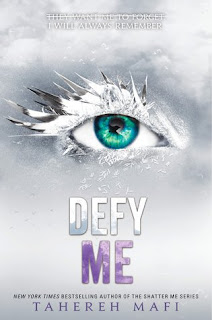 Juliette is still reeling from Warner's betrayal, and Kenji is trying to balance his friendship with her with his responsibilities as a leader of the resistance against the Reestablishment. Things get even more interesting when an unexpected person from Omega Point's past surfaces.

From Goodreads:
The gripping fifth installment in the New York Times, USA Today, and Publishers Weekly bestselling Shatter Me series. Will Juliette's broken heart make her vulnerable to the strengthening darkness within her?

Juliette's short tenure as the supreme commander of North America has been an utter disaster. When the children of the other world leaders show up on her doorstep, she wants nothing more than to turn to Warner for support and guidance. But he shatters her heart when he reveals that he's been keeping secrets about her family and her identity from her—secrets that change everything.

Juliette is devastated, and the darkness that's always dwelled within her threatens to consume her. An explosive encounter with unexpected visitors might be enough to push her over the edge.

My Review:
Wow, I just loved reading these books! I just devoured them, they changed so much about the world, and were just incredible to read! The beginning of Defy Me was confusing because the characters were being drugged, but I couldn't put it down!

It's funny, I thought I knew so much about this world, about these characters. These books, like Restore Me, showed how little I actually did know. Well, a lot was hidden, but there were a ton of reveals, and so many twists, it was a roller coaster ride and I loved it!

Shadow Me gave us Kenji's side of what happened at the end of Restore Me which is good because that was such an evil ending! And it was pretty great as well being in his head, because he's such a great character!

Defy Me, yeah, it was a bit mind bending because of the drugs, and so we were kinda getting what was happening, but not all of it. But then it started to make more sense and what we learned was kinda horrifying. But that ending definitely made up for it, though I still want the big show down!

I loved these so much, and I can't wait to see how the series is going to end!