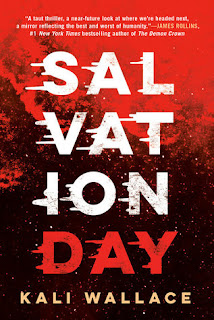 From Goodreads:
A lethal virus is awoken on an abandoned spaceship in this incredibly fast-paced, claustrophobic thriller.

They thought the ship would be their salvation.

Zahra knew every detail of the plan. House of Wisdom, a massive exploration vessel, had been abandoned by the government of Earth a decade earlier, when a deadly virus broke out and killed everyone on board in a matter of hours. But now it could belong to her people if they were bold enough to take it. All they needed to do was kidnap Jaswinder Bhattacharya—the sole survivor of the tragedy, and the last person whose genetic signature would allow entry to the spaceship.

But what Zahra and her crew could not know was what waited for them on the ship—a terrifying secret buried by the government. A threat to all of humanity that lay sleeping alongside the orbiting dead.

And then they woke it up.

My Review:
This book was really fantastic! I just had to read it right away, because it sounded intriguing and I wanted to explore the mystery/horror of what happened and what's going to happen to House of Wisdom!

There were two things that I really enjoyed about this book. The first is the characters. They were different people, Zahra with a personal connection to House of Wisdom, and Jaswinder, scared from what happened. The second was the world. Yeah, the world has been through some horrible things between now and then, and a big reason why the characters were doing what they were doing. Yeah.

There was something off about the way that Zahra's leader, well, leaded. He was just a little bit too angry, controlling, and the way that they followed him, without question, yeah, I was uneasy about that whole situation.

Honestly, I'm left with a few questions. To try and not spoil, that threat, well, I still have questions about it. And if we got a sequel answering those questions, yeah, that would be pretty awesome, because yeah, this was a pretty great book!

Loved this book, and yeah, I wouldn't mind a sequel!