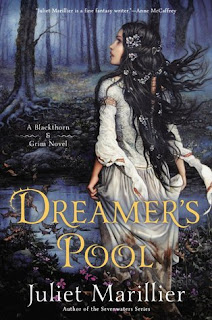 From Goodreads:
Award-winning author Juliet Marillier "weaves magic, mythology, and folklore into every sentence on the page" (The Book Smugglers). Now she begins an all-new and enchanting series that will transport readers to a magical vision of ancient Ireland...

In exchange for help escaping her long and wrongful imprisonment, embittered magical healer Blackthorn has vowed to set aside her bid for vengeance against the man who destroyed all that she once held dear. Followed by a former prison mate, a silent hulk of a man named Grim, she travels north to Dalriada. There she'll live on the fringe of a mysterious forest, duty bound for seven years to assist anyone who asks for her help.

Oran, crown prince of Dalriada, has waited anxiously for the arrival of his future bride, Lady Flidais. He knows her only from a portrait and sweetly poetic correspondence that have convinced him Flidais is his destined true love. But Oran discovers letters can lie. For although his intended exactly resembles her portrait, her brutality upon arrival proves she is nothing like the sensitive woman of the letters.

With the strategic marriage imminent, Oran sees no way out of his dilemma. Word has spread that Blackthorn possesses a remarkable gift for solving knotty problems, so the prince asks her for help. To save Oran from his treacherous nuptials, Blackthorn and Grim will need all their resources: courage, ingenuity, leaps of deduction, and more than a little magic.

My first review of Dreamer's Well
My Review:
Reading this book was just so fantastic! I love the world that is historical but with a touch-or sometimes a helping-of magic. The characters, yeah, both Blackthorn and Grim are scarred by the world, but they're still here and I loved reading about them!

Blackthorn and Grim are in a pretty tough spot in the beginning, seeing as they're in prison. Blackthorn is pretty angry, and rightfully so, given the crimes against her. I really enjoyed their dynamic, and knowing that they will get together, I enjoyed our first getting to know them again!

I pretty much remembered what happened in this book, at least with the plot with the Dreamer's Well. And the whole time, I was itching for them to get the souls in their correct bodies. I knew it didn't happen until the end, but I just wanted it to happen!

There was also the plot with the miller's daughter and the baker. I didn't quite remember what happened there, but I remember that certain bits were important, so I put it together again sooner than I did the first time!

Loved reading this book again and I can't wait to reread more!