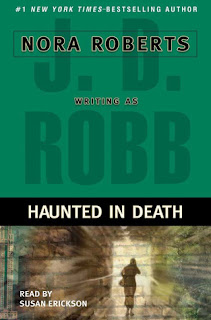 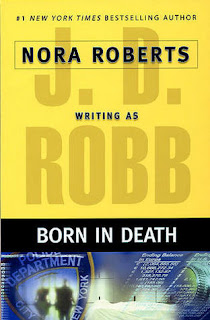 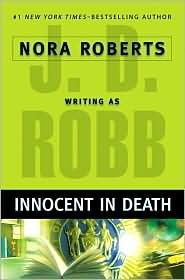 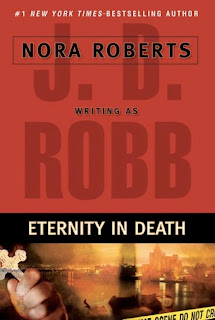 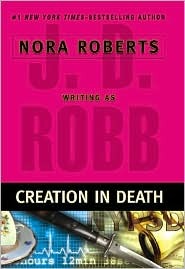 From Goodreads:
Number Twelve is an urban legend in 2060 New York City. The hot club in the 1960s, it is now reported to be haunted…and cursed. Lieutenant Eve Dallas is called there to investigate the apparent murder of Radcliff Hopkins, its new owner and the grandson of the man who made Number Twelve a cultural icon. Several bullets from a banned gun end his dream of returning the building to its former glory.

With everyone around her talking about the supernatural, pragmatic Eve won't let rumors of ghosts distract her from hard evidence. The case becomes even more bizarre when it appears to be linked to the suspicious disappearance of a rock star eighty-five years ago. As Eve searches for the connection, logic clashes with the unexplainable. She may be forced to face the threat of something more dangerous than a flesh-and-blood killer.

From Goodreads:
Eve Dallas has a grisly double homicide to solve when two young lovers—both employees of the same prestigious accounting firm—are brutally killed on the same night. It doesn't leave Eve a lot of leftover time to put together a baby shower for her buddy Mavis, but that's supposedly what friends are for.

Now Mavis needs another favor. Tandy Willowby, one of the moms-to-be in Mavis's birthing class, didn't show up for the shower. A recent emigrant from London, Tandy has few friends in New York, and no family—and she was really looking forward to the party. And when Eve enters Tandy's apartment and finds a gift for Mavis's shower wrapped and ready on the table—and a packed bag for the hospital still on the floor next to it—tingling runs up and down her spine.

Normally, such a case would be turned over to Missing Persons. But Mavis wants no one else on the job but Eve—and Eve can't say no. She'll have to track Tandy down while simultaneously unearthing the deals and double-crosses hidden in the files of some of the city's richest and most secretive citizens, in a race against this particularly vicious killer. Luckily, her multimillionaire husband Roarke's expertise comes in handy with the number crunching. But as he mines the crucial data that will break the case wide open, Eve faces an all too real danger in the world of flesh and blood.

From Goodreads:
The phenomenal series set in a future New York City returns as NYPSD Lt. Eve Dallas hunts for the killer of a seemingly ordinary history teacher-and uncovers some extraordinary surprises. Craig Foster's death devastated his young wife, who'd sent him to work that day with a lovingly packed lunch. It shocked his colleagues at the private school, too, and as for the ten-year-old girls who found him in his classroom in a pool of bodily fluids-they may have been traumatized for life.

Eve soon determines that Foster's homemade lunch was tainted with deadly ricin, and that Mr. Foster's colleagues have some startling secrets of their own. It's Eve's job to sort it out- and discover why someone would have done this to a man who seemed so inoffensive, so pleasant . . . so innocent.

Now Magdalena Percell . . . there's someone Eve can picture as a murder victim. Possibly at Eve's own hands. The slinky blonde-an old flame of her billionaire husband, Roarke-has arrived in New York, and she's anything but innocent. Roarke seems blind to Magdalena's manipulation, and he insists that the occasional lunch or business meeting with her is nothing to worry about . . . and none of Eve's business. Eve's so unnerved by the situation that she finds it hard to focus on her case.

Still, she'll have to put aside her feelings, for a while at least-because another man has just turned up dead. Eve knows all too well that innocence can be a fade. Keeping that in mind may help her solve this case at last. But it may also tear apart her marriage.

From Goodreads:
When club-hopping bad girl Tiara Kent is found dead in her plush Manhattan apartment, the killing has all the earmarks of a vampire attack. The ever-practical Lieutenant Eve Dallas has to deal with superstitious cops carrying garlic and stakes, as well as the ever-hysterical press. None of the wealthy young victim's friends seem to know much about the Dark Prince she has been secretly seeing. The chase to stop him before he kills again will lead Eve and her team into areas of the city that not even the most intrepid cop wants to visit, and into the very heart of darkness.

From Goodreads:
NYPSD Lieutenant Eve Dallas keeps the streets of a near-future New York City safe in this extraordinary series. But even she makes mistakes, and is haunted by those she couldn't save-and the killers she couldn't capture. When the body of a young brunette is found in East River Park, artfully positioned and marked by signs of prolonged and painful torture, Eve is catapulted back to a case nine years earlier. The city was on edge from a killing spree that took the lives of four women in fifteen days, courtesy of a man the media tagged "The Groom"- because he put silver rings on the fingers of his victims.

When it turns out that the young brunette was employed by Eve's billionaire husband, Roarke, she brings him in on the case-a move that proves fitting when it becomes chillingly clear that the killer has made his attack personal. The victim was washed in products from a store Roarke owns, and laid out on a sheet his company manufactures. With the Groom's monstrous return, Eve is determined to finish him once and for all. Familiar with his methods, Eve knows that he has already grabbed his next victim. Time is running out on another woman's life.

And chances are he's working up to the biggest challenge of his illustrious career-abducting a woman who will test his skills and who promises to give him days and days of pleasure before she dies: Eve.

From Goodreads:
Technology may be different in 2060 New York, yet the city is still a place of many cultures and great divides. But as ever, some murders receive more attention than others-especially those in which the victim is a prominent businessman, found in his Park Avenue apartment, tied to the bed-and strangled- with cords of black velvet.

It doesn't surprise Lieutenant Eve Dallas that Thomas Anders's scandalous death is a source of titillation and speculation to the public-and of humiliation to his family. But while people in the city are talking about it, those close to Anders aren't so anxious to do the same. With some help from her billionaire husband, Roarke, Eve's soon knocking on doors-or barging through them-to find answers.

But the facts don't add up. Physical evidence suggests that the victim didn't struggle. The security breach in the apartment indicates that the killer was someone known to the family, but everyone's alibi checks out. Was this a crime of passion in a kinky game gone wrong-or a meticulously planned execution? It's up to Dallas to solve a case in which strangers may be connected in unexpected, and deadly, ways.

I just love this series! It's so very long, and there are things that get mentioned, or they do a lot, but yeah, these books are just freaking great to read! I just love Eve and how she doesn't get sayings, and just gets to what doesn't make sense to her. It's hilarious!

Lots of things happen in this book, from short stories I haven't read before, creepy bad guys, evil bad guys, and yeah, Strangers, I love how they used the stranger on a train mystery, it was just awesome, and having Peabody become more confident in her investigative skills!

This gang, the group of people that she utilizes, from fellow cops, friends, Mira and Nadine, just all them, to find, and bring, bad guys to justice, it's just awesome! Part of the reason this series is just so freaking good-and long lasting!

Loved reading these books, and I can't wait to read more! I just love them!