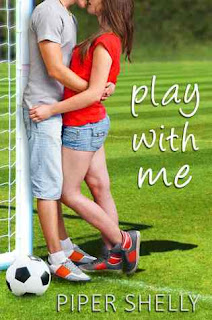 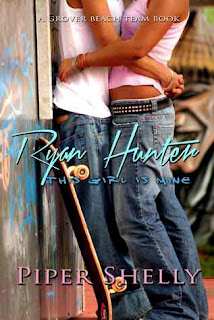 From Goodreads:
Ryan Hunter's parties are legend. And tonight she's going to be there.

Liza Matthews anticipates the return of her best friend and only love since kindergarten from soccer camp. But when Tony finally shows up, his mind is more focused on another girl. And worse, she's a soccer player. Fighting for the attention Liza craves, she's just a hairbreadth away from making a very stupid decision. But when extraordinary times call for extraordinary measures, she's prepared to play ball to get her man.

The tryouts are hell, the first match ends bloody, and the morning after the selection party she wakes up in the worst place possible—in the arms of the captain of the soccer team. The hottest guy in school. Ryan Hunter.

From Goodreads:
Ryan Hunter kissed more girls than he cares to remember. But the only one he ever wanted is in love with his best friend.

Watching Liza Matthews' obsession with Tony Mitchell is a torture Ryan conceals from everyone. Until after a five-week soccer camp, where Tony gets involved with someone else, things suddenly take a different turn. Ryan knows if he doesn't make a move now and grab his chance, he might never get another.

Asked by Tony to distract Liza, Ryan is only too happy. He subtly seduces her first into his soccer team and later on to his party. He does all in his power to make her see that he's not just an insufferable playboy but a guy who really cares about her.

Some one-on-one soccer training, a passionate kiss — things seem to be going the way he wants. Except Ryan didn't reckon on his best friend showing up at the worst possible moment and destroying everything...

My Review:
I'm so glad that I heard of this series. I mean, I wasn't planning on reading these books, until I saw them, and thought they sounded pretty good, and decided to read at least Play With Me. Which was just so good that I had to read Ryan Hunter right after!

It's just that these books were just so sweet! I mean, girl is in love with guy, and guy's best friend is in love with girl. But since Best Friend Guy is also a player, well, yeah, that adds another complication to the relationship!

One of the best things, of the reading these back to back, is that Ryan Hunter had  some scenes from before Play With Me started, of the soccer came, which was great. It also went past where Play With Me ended, so we got to see her meeting his parents, which was really sweet!

I just enjoyed the both of these so much, they were really great to read!