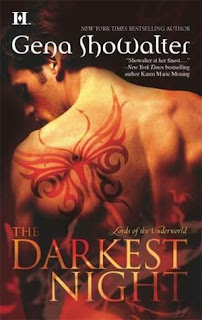 From Goodreads:
His powers - Inhuman...

His passion - Beyond immortal...

All her life, Ashlyn Darrow has been tormented by voices from the past. To end the nightmare, she has come to Budapest seeking help from men rumored to have supernatural abilities, not knowing she'll be swept into the arms of Maddox, their most dangerous member -- a man trapped in a hell of his own.

Neither can resist the instant hunger than calms their torments... and ignites an irresistible passion. But every heated touch and burning kiss will edge them closer to destruction -- and a soul-shattering test of love...

Though they carry an eternal curse, the Lords of the Underworld are irresistibly seductive -- and unimaginably powerful...

My Review:
Ah, the book that started it all! And the couple that is just the best! They're the ones that start the other guys finding, and falling in love, with their others halves! So yeah, the other guys (and soon, girl, hopefully) should be thanking them!

That Ashlyn was working for the Hunters, well, not fun. But she didn't know their darker side. She just knew that they knew about her abilities, and they accepted her. Well, they used her gifts, which is pretty much the same to her, until now!

Then Maddox, and how he had the extra punishment because of what he did to Pandora when they fought her, is a bit bittersweet. Because he did kill her, and pretty much in the same way. But he only did it once, not over, and over, and over. And then that his friends have to participate, is even worse!

I just loved reading their story, and the one scene with the painkillers, since it worked out fine, was really funny! And how Anya helps Ashlyn, yeah, it was great to have her introduced, because her book with Lucien is next! And Danika's in this book, too! So yeah, go, characters for future books!

This book will always hold a special place in my heart-it started off this series! I just love it!

Author: Gena Showalter
Series: Lords of the Underworld #1
Read: May 15th, 2013
Source: Own
Reason Why: Love Gena Showalter's writing, and I had to reread her books! And it's a JFF Book!
Publisher: HQN
Published: May 3rd 2008